Bullet For My Valentine to play Belfast and Dublin Posted: 18/08/2015 by John O'Brien 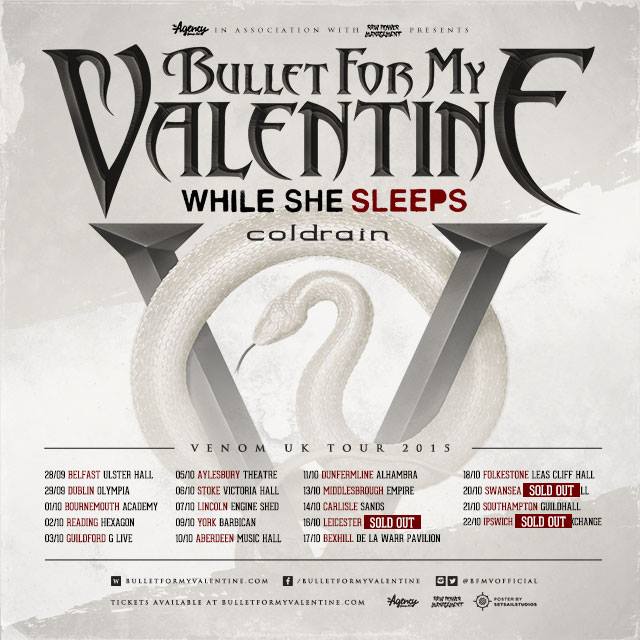 BULLET FOR MY VALENTINE

Special guests joining them on their UK/Ireland tour will be Sheffield’s WHILE SHE SLEPT, along with support from Japan’s COLDRAIN.

Bullet For My Valentine | While She Sleeps | Coldrain
Live at The Ulster Hall – 28th September, 2015
Tickets from £25.50 inclusive of booking fee charge
Ticket link ; Ticketmaster

Bullet For My Valentine | While She Sleeps | Coldrain
Live at The Olympia Theatre – 29th September, 2015
Tickets from €29.50 inclusive of booking fee charge
Ticket link ; Ticketmaster

Over the course of their career, BULLET FOR MY VALENTINE has sold millions of records, amassed a worldwide army of fans, garnered hundreds of millions of video/track streams, appeared on dozens of magazine covers and received mass critical praise for their highly-influential albums. Now, the band looks to transcend genres and trends with their game-changing 5th studio album, VENOM, out now via RCA Records.

Produced by Carl Bown and Colin Richardson (Slipknot, Machine Head, Trivium) at Metropolis Studio in London, VENOM is an unrelenting, fierce step forward for Bullet For My Valentine. Their heaviest record to date sinks its teeth into listeners with a powerful delivery by vocalist/guitarist Matt Tuck, ferocious riffs by guitarist Michael “Padge” Paget and rapid-fire rhythm courtesy of drummer Michael “Moose” Thomas. On VENOM the trio maintains their signature balance of heavy, coupled with surging melody, and pushes themselves to the next level.

In addition to the news of the upcoming record, Bullet For My Valentine has also announced they’ve recruited fellow Welsh musician Jamie Mathias to join the band as their new bass player and backup vocalist.