ASTRALNAUT don’t like to rest on their laurels. The band have been on the go now for about three years but have maintained a steady flow of musical output with three EP’s (and a CD single) notched on their collective belts. Add to that the bands commitment to live shows with their consistent gigging regime and you have a band hell bent on staking their claim as one of Northern Ireland’s best.

Their 2012 debut ‘Back To The Bog’ EP was a welcome breath of fresh air to the local music scene and is easily one of the best debuts in recent years. And it’s follow up, ‘In The Gaze Of The Gods’, the year after continued the bands mission to deliver swathes of Doom to the masses. And now their latest studio effort has been let loose upon the masses. ‘Thieves, Beggers and Swine’ is yet another slab of granite heavy doom riffs and shows that the band has no intention of dropping the ball any time soon.

The Irish Metal Archive caught up with frontman, Thomas Mallon, and asked a few questions about the bands current line-up, latest release and future plans.

Hi! Thomas…
Thanks a million for taking the time to answer some questions.

My pleasure! Thanks for asking!

First off! ASTRALNAUT have only been active for a few years now but you certainly like to keep yourselves busy, with ‘Thieves, Beggers and Swine’ being your third EP in as many years. Even with some line-up changes last year you seem to have managed to keep things rolling along fairly smoothly. Did this personnel change affect the bands dynamic at all? Say with regard to writing and rehearsing? 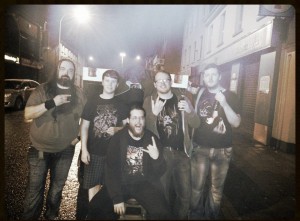 There was definitely a transitional stage last year when our old bassist, Damo, was leaving and Jon Joe was joining. Damo was an integral part of the band at the time but he gave us plenty of notice, so that left ample time to make the practical arrangements such as finding a new member, a new place to practice and things like that. We really wanted a new member to be a part of the team rather than a replacement. Thankfully, in Jon Joe, we got more than we bargained for.

There was a natural getting to know you stage, an aligning of personalities so to speak, but once we got to know each other then when it came down to writing, rehearsals, recording, creativity etc, Jon Joe pitched in whole heartedly. His contribution to the band since joining has been invaluable, everything from his personality to his playing, even the tone of his bass fits perfectly in Astralnaut. and he’s actually a guitarist by trade! So Jon Joe did have the additional challenge of getting used to playing 4 strings instead of 6, but if you listen to the new EP its testament to his ability and on some of the songs there are actually 4 bass tracks.

As active as the band are! You seem to take your time when it comes to recording. As far as I’m aware, each of your first two EP’s took a number of weeks, months even, to record, mix, etc… Did your approach to recording this new EP differ much from your previous efforts?

We roughly followed the same formula. When it comes to recording it pays to take your time, we set ourselves deadlines but to quote The King, ‘only fools rush in’. Our method is usually get the drums down first, and for our previous stuff we actually had the majority of the drums for the first two EPs done before we’d even released the first. This time round the drums were recorded in Hi-Tone Studio, in Balbriggan, Co. Dublin, with our friend Alan Hanlon from Crafty Fuzz/Nautilus. It was a great atmosphere and gave us a solid foundation from which we could then begin recording guitars.

The guitars where recorded by Jon Joe and Gaz (lead guitar). The sound that the lads can achieve is as powerful as we could hope to get in a studio so that saves us time and money. Then that left the vocals which were recorded by Clark Phillips at Great Northern Productions in Belfast. Clark has worked on everything we’ve done to date and we have mutually developed since the beginning so we felt comfortable going back to him. He understands where we’re at and what we want. Between ourselves and Clark we mixed and then Clark mastered. The difference between previous efforts would have to be that we’ve refined what we’ve done; we’ve learnt as we’ve gone along and tried to step everything up from the writing to the recording. 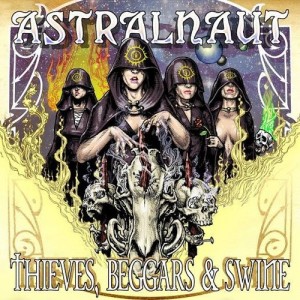 Once again, your EP artwork is very impressive and sets a tone before any music is even heard! What’s your process behind choosing your artwork? Do you have much input with the design at all?

We have a significant input when it comes to the artwork but the credit for how fantastic it ultimately looks belongs to W. Ralph Walters. We met Ralph at a gig we were playing in Dublin while he was in Ireland for a holiday.  We had a mutual friend in Trevor Seery from Online Music Tree. Trev loves the fuzz! When we met Ralph we were working towards releasing the ‘Emerald Lord of Pleasure’ single, we had an idea of what we wanted but when self producing a first draft for the cover instead of looking like a medieval warrior smoking a bong it looked more like a medieval warrior smoking…    well not a bong to say the least! Us meeting Ralph was perfect timing, I explained the concept to him and on his flight home he sketched us something out. There was no turning back after that, much like Clarke with the mixing and mastering, Ralph knows what we’re about and his work is fantastic. This time round I brought him the concept and he ran with it, what we ended up with is beyond what I had imagined and I love it. As a band we look at the artwork as a vital part of a release. If the music is strong then the artwork needs to be strong too. If we released a cover with stickmen on the front I just don’t think it would have the same impact.

Have you had any labels show any interest in working with the band? All of your releases to date have been self-released. Do you prefer to keep control of the bands running and dealings or would you consider working with a label? Even just for distribution.

We’ve received contact from a few labels and it is definitely something that we would consider but it’s dependent upon what’s on offer. With ‘Thieves, Beggers and Swine’ we did have the intention of working with an Irish indie label, which we may still do but when it came to the crunch the timescales just didn’t work out. Control of the particulars on the build up to a release is something that we not only enjoy but we also think of it as a fundamental part of what we do. I think there is a misconception that once you’re signed then you’ve ‘made it’ but it’s not just that simple. There’s a lot of planning when recording and releasing your own music and having a label, while it may make it easier in some respects, it has the potential to make things more complicated. The way we operate the band presently suits us, we answer to no one but ourselves, there’s no vast financial pressures or finality on whether the release is a ‘hit’ and I’d like to think that, at least in the first instance, we’re proving that we can do it ourselves. If we can do that then we prove that we’re self sufficient and that could be an alluring quality for a label that is on the hunt for a new band but ultimately we’re not relying or dependent upon anyone else. 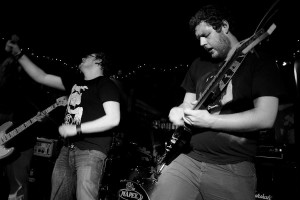 With regards distribution, we discussed it numerous times, it’s something that we’re keen to do but the circumstances have to be right too. What it boils down to is anyone in the world can already buy our music online, it can be posted right to their door, having other channels through which you can do that seems like a no brainer but before they buy they’re going to have to hear of Astralnaut. Getting your music out to the audience is one of the key challenges, distribution means they can buy it but what makes them want it in the first place.

I have to agree with you there! It’s a no-brainer for any unsigned band to at least stream their music freely online! Get their music across and hopefully entice punters to buy it or even want to catch the band live. You’re a very active gigging band and seem to be playing some corner of the Island at one point or another. Do you make a conscious effort to get out and play as often as possible?

In short, yes. We love to play live. When we were recording we really missed playing shows and couldn’t wait to get back to gigging. It goes back to getting your music out there, you can have promotion, a great online presence but without boots on the ground what’s it worth. Playing live should be your bread and butter, it fundamental, that’s our grassroots. Undoubtedly we have gained more fans through playing live and every time you play you need to give it all you got. We’ve played gigs to basically an empty room but the few people that where there will remember, ‘those guys played and they gave it stacks!’ so they’ll tell a friend and the next time there’s a few more people. My number one rule is you’ve got to enjoy it yourself. We wrote the songs because that’s the kind of music we like, when we play our audience can see that we’re having fun onstage and if you give that energy out you’ll get it back tenfold. 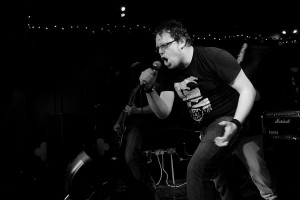 And finally! You have some upcoming gigs in the pipeline to support the new EP. Have you any plans to gig or tour further afield now that you have three solid releases in the bag?

An Irish tour is on the cards for sure and we do have plans to head across the water, we’re hoping to do that before the end of the year but as usual the devil is in the detail. In terms of upcoming gigs, we’ve just played locally in Armagh (always a pleasure), we’re heading to Galway Saturday May 23rd, then our Belfast EP launch with Bad Boat and Aquatramp takes place on Thursday May 29th and June 13th and 14th we’re hitting up Derry and Letterkenny respectively. There are also other gigs in the pipeline and we have a video coming out in the next few weeks to support the release too. We laughed our way through the first draft so we’re hoping that’s received well. We’re also very keen to get back writing so anyone reading this keep an eye out online to stay up to date.

The Irish Metal Archive will certainly be watching anyway!
Thanks again for your time! Best of luck with the new EP.
And I hope to catch you down here in Cork sometime soon…  (hint!)

Thanks John! We’ll definitely hit up Cork before the end of the Summer!

The band are hitting the stage in the coming weeks and months to support the release,
including a number of EP launch gigs around the country…