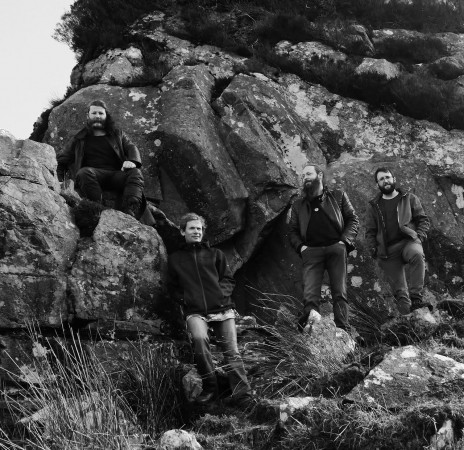 UAIGNEAS have recorded a number of songs for a possible future releases. One that was previously mentioned is limited to 250 copies CD single entitled ‘The Dusking of a New Day’ which was due to be released prior to the ‘Buí EP‘ but I haven’t heard anything yet about it’s actual release. There was also mention of a second EP due to be released sometime after ‘Buí‘ which is to be titled ‘Donn’.

There was also a six track demo recorded in 1996 called ‘An Tús’. Whether this was officially released at the time, I have no idea, but apparently most of the tracks recorded were eventually used on the first two MAEL MÓRDHA EPs. UAIGNEAS soon went on hiatus as MAEL MÓRDHA started to progress with their own style and sound. But Rob revived the project once again in 2003.

UAIGNEAS is a Gaelic Doom Metal band from Ireland which started in and around 1995. In 1998 it morphed into MAEL MÓRDHA. In 2003 as MAEL MÓRDHA’s musical direction became more what it is today, UAIGNEAS began writing music more in keeping with the early MAEL MÓRDHA/UAIGNEAS material.

“UAIGNEAS began life in the hills of Deasmhumhan in and about 1996 drawing its musical influences from the traditional music of the area mixing them with Doom Metal and poetry based on the area’s natural surroundings, history and poetic styles common to the old Gaelic order thus creating ‘Gaelic Doom Metal’ or ‘Ceol Breatha Gaedhealach’.

In January 1998 UAIGNEAS was put on hold as MAEL MÓRDHA was born. The ideas for UAIGNEAS, however, kept coming and has resulted in numerous works of poetry and pieces of music.

UAIGNEAS was re-started again in 2003 and has slowly developed its sound mixing cláirseach (brass strung Gaelic Harp), whistle, mandolin, bodhrán (type of Irish drum), piano, electric piano, keyboards and vocals together to continue the Gaelic Doom style and ready it for recording. Attempts to put order to these offerings have been ongoing since 2006 including some preliminary recordings with Frederiek Laumans which have taken some of the songs and turned them into a classical/darkwave collection.

UAIGNEAS debut EP entitled “Buí” was released on the 21st of September 2011 and it’s follow-up “Teamhair” in March 2018.