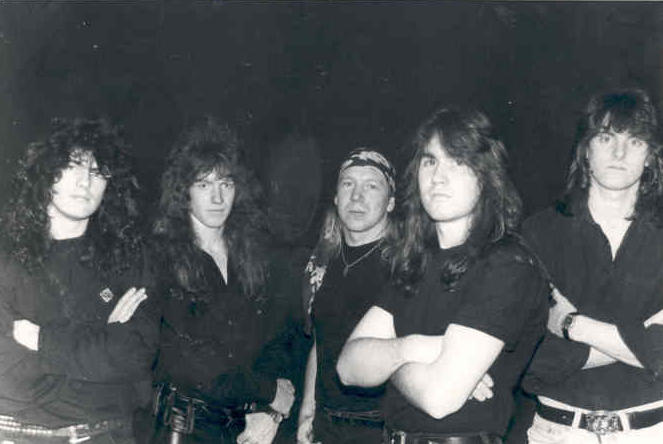 PREDATOR were a traditional Twin-Lead Heavy Metal band hailing from Dublin, Ireland, formed in 1987 by Peter Dickson (Bass) and Alan Byrne (Drums) later evolving a more thrash influenced sound. The original line-up was completed by Sean (Grover) McBride on Vocals, with Niall McGreevy & Tommy Whelan on guitars. The band recorded a self-titled demo tape in 1988 which led to them getting a deal with Dublin’s Solid Records for the release of their ‘Predator EP’ the same year. Also in 1988, they had the track ‘Missing In Action’ feature on a cassette only, Solid Records Sampler Compilation called ‘Solid Citizens’.

Not long after the EP’s release, Whelan left due to other commitments and the band continued constantly gigging for the next 18 months with McGreevy fulfilling all guitar duties. Sean McBride left shortly after that and was  replaced by John O’Brien who brought a different style of vocals to the band for the recording of the next two demos before Jerry Galvin was eventually recruited to help restore the twin guitar sound and complete the line-up for future work.

The bands management and label had the band in a bit of a stranglehold, however, restricting recording and live shows and ultimately contributing to the eventual demise of the Band. It wasn’t long before O’Brien left and Lar Fraser replaced him, having recently returned from the UK where he had been fronting Kentish Thrashers First Blood. The band set about playing a few shows during which time McGreevy quit before the writing and recording of the final “Cross My Path….” Demo on New Years’ Eve 1991. The track‘Cross My Path And Hope To Die’ was included on the cassette-only‘The Compilation of Nursery Rhymes in A Minor’ which was released on Emperor Of Eagles Records in 1992.

Throughout their career Predator always stayed true to the core belief of Heavy Metal before they finally disbanded in 1992. Exactly how many other tracks remain unreleased is not known…

I was briefly in contact with PREDATOR bassist Peter Dickson and he told me it was OK with him to upload the demo tracks for everyone to listen to. And the gent that he is, he also forwarded on a copy of the EP for me to upload too, which includes an outtake track from the EP recordings. A re-recorded version of the track ‘Celtic Attack’ from the first demo. He also told me that the band recorded a total of four demos plus the EP. So! If anyone has any more info on the band or can provide a copy of any releases missing from here, please get in touch.