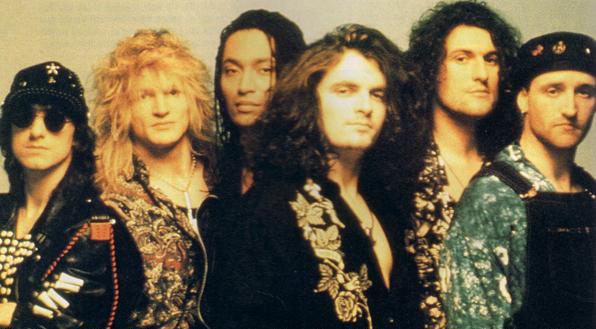 NO SWEAT were an Irish rock band, active during the late 1980s and early 1990s. Originally going by the name STATESIDE and managed by none other than Louis Walsh, they are best remembered for their single ‘Heart And Soul’, which topped the Irish charts for two weeks in June 1989. The single was produced by DEF LEPPARD frontman Joe Elliott, who also helped them to secure a contract with London Records. The group had two further hits the following year with ‘Tear Down the Walls’ (#4) and ‘On the Edge’ (#11). 1990 also saw the release of their self-titled debut album, which was produced by Keith Olsen for Pogo Logo Corp. and recorded at Goodnight L.A. studio’s in Van Nuys, California, USA. Former drummer James Kottak (KINGDOM COME, SCORPIONS, WARRANT, WILD HORSES, MONTROSE) features on the album, before Ray Fean was in the band.

They supported THUNDER on their ‘Backstreet Symphony’ tour in 1990. And supported LITTLE ANGELS in Britain during May 1990. ‘Heart And Soul’ and ‘Tear Down the Walls’ were released as singles in the U.K. in late 1990 and early 1991, with both enjoying minor success. The former spent four weeks in the top 75, but never rose above #64, while ‘Tear Down the Walls’ peaked at #61.

P.J. Smith and Jim Phillips parted company with the band in mid-1991 before the group split for good. Guitarist Dave Gooding later teamed up with ex-LITTLE ANGELS men Bruce and Jimmy Dickinson to form the blues-rock band B.L.O.W. in 1994, where he switched to the role of frontman. Smith was later involved in the Vivian Campbell (DIO, DEF LEPPARD, SWEET SAVAGE, THIN LIZZY) and Mark Schulman(FOREIGNER) side project, CLOCK, during 1998.

The three singles mentioned above were all released on various formats with exclusive b-sides and are very easy to find on eBay. The album is also widely available to find on the internet.