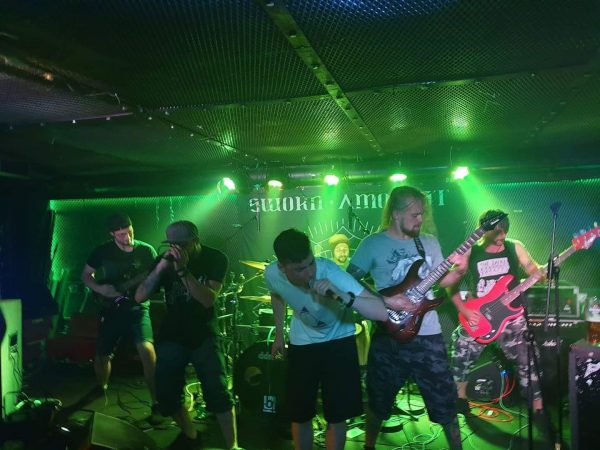 Awaken Dominion are a hard hitting Groove metal band from Mullingar, County Westmeath in the Irish midlands. Founded in 2006 by Mooney and O’Reilly, AD became a full band in August 2007 and has gone through a number of lineup changes. Brought together by mutual interests and a desire to play music they started jamming and writing together. One year and a handful of gigs later Shane Greville joined up on guitar, allowing Anto to focus on vocals. Ciaran Joy was brought in on drums in late 2010 and Evan Connolly completed the puzzle on bass in 2011.

The band has a combination of influences, from Heavy Metal of all types, classic and modern, as well as drawing inspiration from other genres like Jazz, Blues and Progressive Rock. The result is a distinctive Groove metal sound, incorporating chugging riffs, technical breakdowns and soaring melodies, punctuated by a range of guttural growls, high pitched screams and clean vocals. The sound is still quite versatile and has been well received while playing with bands from a wide range of genres.

Driven by a strong work ethic and a genuine passion for the music they listen to and create, Awaken Dominion put everything that they have into honing their craft and this is evident in their wildly energetic live shows. Due to a genuine lack of a local metal scene, they have been forced to travel far and wide in search of gigs, no matter where they may be. As a result they have played in all corners of the Republic of Ireland, have shared the stage with international bands Scar Symmetry, Beholder, Bloodshot Dawn and Sworn Amongst and they are hungry to go further.

They recorded their debut in Komodo Studios with Alwyn Walker. Released their second EP “As the Tide Takes You Away” in November 2013. And recorded new music during 2020 which they released in early January 2021 as the “The HighRise Project EP”.