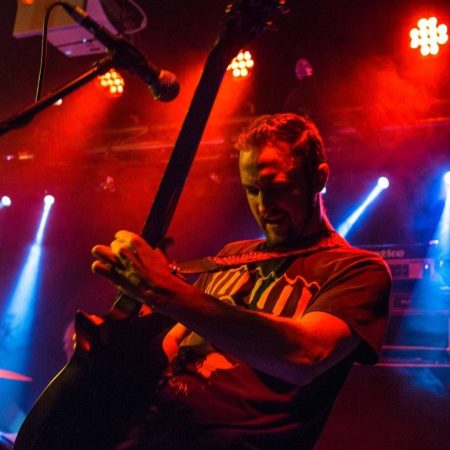 Official Biography from the man himself…

ASTRALIST is a one man project, or at least has begun this way. I am constantly writing riffs and anything I deem not suitable for Coroza goes into a folder of literally hundreds of other riffs I have built up that never found a home. I began piecing songs together a little over a year ago and had always wanted to put together a band with a much darker flavour, stemming from a number of my own musical (and non-musical) influences.

The idea behind this project was to just let the ideas flow and see where it took me. The music came first, I did some scratch tracks of guitars and fleshed out 6 songs in total (from around 35 unfinished tracks). 4 of those made sense when lined up together, so they became the basis for the demo. 2 have been left over for inclusion in the next batch. I recorded the 6 tracks over a few weeks – the pandemic lockdown giving me the perfect opportunity to do so. The idea of live music not happening for quite some time made me rethink putting a band together and just getting a demo done and see how well it would be received. I recorded it all from home and in a rehearsal space using various types of software and did all the instrumentation and vocals. Obviously not being a drummer I programmed the drums, trying to keep it as “human” sounding as possible.

Lyrically, it’s a loose concept about a person who ends up in the bardo – the place in Buddhist philosophy where you end up after death and just before your rebirth. This person chooses not to be reborn, but also rejects the idea of death and simply becomes a different form, taking on the role of the “Astralist”, and being left between worlds. The word Astralist actually doesn’t mean anything. I think there is some World of Warcraft character with that name – but I’m not really into that kind of stuff so have no idea about that. As a name it just suggests to me some deeper connection to the cosmos.

“The Outlier” explains this concept, with “Bardo” being a peaceful instrumental that is shattered by a wall of sound. “Entheogen” is a slight continuation of the theme, with the idea that there are certain chemicals that induce a spiritual high that you could use to explore the inner and the outer and that all is interconnected. The last song “Zuhal, Rise” is a loose exploration of the entity Zuhal who was an ancient Middle Eastern goddess of the planet Saturn. Saturn still has many cults today, including a large one in India. “Zuhal, Rise” is basically an invocation for Saturn to return, bringing good favour to those who ask, but with possibly terrible consequences as a result. Saturn is to be revered and feared simultaneously.

As for the artwork, the symbol doesn’t hold too deep of a meaning. I just designed it in photoshop with the central motif being like a “black sun” – another term used for Saturn. The logo, I designed as an ambigram so it could be read upside down and still look the exact same. I then just placed both over a deep space photo of a nebula, with some changes to colours, etc.

I have many, many more tracks to be worked on, lots of themes and lyrics put away so there is always a chance of possibly putting a band together. If not, I’ll just continue the DIY approach. There is no real main genre other than doom metal, which gives me plenty of leeway to go down a psych, acoustic, instrumental route at any given point. There should be no limit. I’m literally just making music I want to hear. If other people are interested, it’s always a bonus.