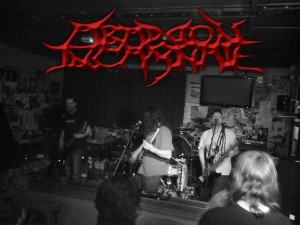 Latest news from the ABADDON INCARNATE camp is that bassist Steve Finnerty has decided to leave the band.

Official statement from AI’s Steve Maher here…
“Got some shitty news, Steve Finnerty has left the band. After 8 years 2 albums and a split vinyl release with phobia, our crusty companion has decided to concentrate on other endeavors.
Our massive thanks goes to his dedication and friendship and from all of us in ABADDON INCARNATE, we wish him the best in all his future projects and in every aspect of his life.
New plans for a bass player have not been finalised yet, as we have not decided what were doing in that respect.
–  STEVE M / AI “

Steve Finnerty is also a member of Dublin based Hardcore/Crust band TWISTED MASS and D-Beat Punk outfit GAZE which he had been involved with alongside ABADDON INCARNATE for a number of years.

Check out the clip below of one of Steve F’s final gigs with ABADDON INCARNATE in Bradley’s, Cork on the 11th April 2015…