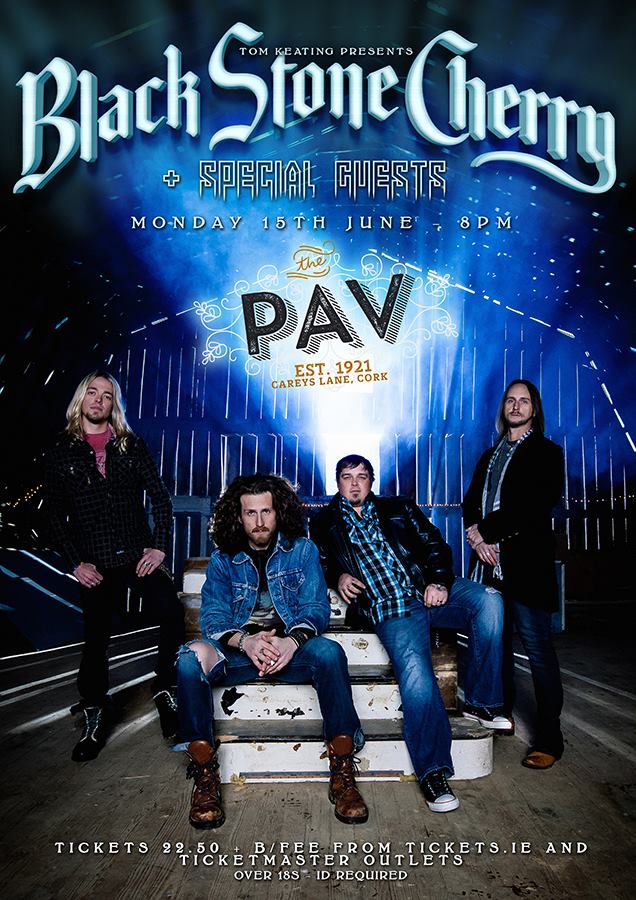 BLACK STONE CHERRY are heading our way in a few weeks and we have a couple of tickets up for grabs for one lucky winner…!!!
The Kentucky rockers will play this years Download Festival at Castle Donnington on the 12th of June, right after which they will be hitting Ireland for three dates. On the 15th at The Pav, Cork… the 16th in the Dublin Academy… and on the 17th in the Ulster Hall, Belfast.

And to celebrate the bands visit to Cork for their show in The Pav on Monday June 15, and being the very good and generous folks that they are, event promoter Tom Keating and Blue Monkey PR have offered up a pair of tickets for one lucky winner out there!

ALL YOU HAVE TO DO TO ENTER…
Just head over at our Irish Metal Archive facebook page…
Give us a ‘LIKE’ (if you haven’t already) and ‘SHARE’ this post.
https://www.facebook.com/irishmetalarchivepage/posts/811068678978413
***(SHARES MUST BE PUBLIC TO BE VALID ENTRIES)***

The competition closes on Friday morning, the 05th June.
The winner will be chosen that afternoon.

Black Stone Cherry bridges the gap between the blue collar craftsmanship of dirty, bluesy, ballsy, pedal-to-the-metal Hard Rock steeped in the ancestral lineage of Southern Rock and the warm, broad embrace of the rock radio mainstream. There’s enough boot stomping, soulful meat-and-potatoes in the Kentucky band’s stew to invigorate Middle America, with the melodic chops to conquer the worldwide stage.

The Allman Brothers and Metallica meeting up, getting drunk, raising some hell and then crashing into a big brawl together, only to have Robert Johnson break it all up? That’s essentially the sound of Black Stone Cherry.

The Black Stone Cherry sound is as timeless as a backyard barbecue, a rundown farmhouse or a worn-in pair of Levi’s, but as forward thinking as anything generated by the millennial crowd in the modern age. 2014’s Magic Mountain carries the torch for the brightest moments of Classic Rock history, but it’s no throwback. The energy, enthusiasm and skill of today’s best rock n’ rollers keeps one Black Stone Cherry boot planted in the future, even as they call upon the musical ghosts of the past.

The universal appeal and undeniable authenticity of Black Stone Cherry’s rock anthems and down-to-earth attitude has won them an increasingly diverse and international fanbase (as evidenced by the #1 debut of Folklore and Superstition on the UK’s rock charts), converting unbelievers while crossing the globe alongside rock royalty like Nickelback, Bad Company, Lynyrd Skynyrd, Def Leppard, Whitesnake, Chickenfoot (featuring ex-members of Van Halen) and Alter Bridge.

Black Stone Cherry originated in Edmonton, Kentucky. and has maintained the same lineup since the band formed on Robertson’s 16th birthday: June 4th, 2001. Robertson and Young have been buddies since kindergarten. “We’ve known Jon since we were 13,” Robertson explains. “We met Ben a couple of days before we started the band. A band should be more than a singer with some fill-in guys. It’s a group of people with a common goal. It’s like a marriage. You argue back and forth but at the end of the day, you love each other.”

It’s that chemistry, loyalty, brotherhood and charm their fans respond to the most. “Most of our fans weren’t born with a silver spoon. They understand what it takes to achieve something in life. They have goals and ambitions, just like us,” says Lawhon. “We have picked up a lot of fans who understand and identify with us.”

Magic Mountain is about to spread that good-time vibe even further ‘round the globe.