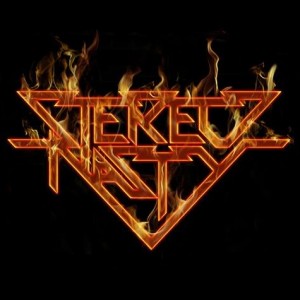 There’s some ‘Nasty’ business afoot as Kildare/Carlow based Heavy/Sleaze Metal deviants STEREO NASTY will be hitting the studio at the end of July for some pre-production recording on an as yet untitled debut album.

Back at the beginning of March 2014 STEREO NASTY released their three track ‘Stereo Nasty’ EP. Having initially only made one track ‘Under Her Spell’ available which received huge praise from across the local Irish metal scene, the band quickly followed it up with a full digital Demo/EP. Along side the addictive ‘Under Her Spell’ the tracks ‘Demon Halo’ and ‘The Warriors’ were added and the EP has since generated a lot of a positivity from punters and reviewers alike.

The Demo/EP was originally recorded by the two founding members, Adrian Foley on instruments and Mick Mahon on vocals. But given the quality of the demo tracks the pair weren’t waiting too long to flesh out the line-up for recording and gigging duties, as they have since recruited Fran Moran on drums and Rud Holohan on bass. And the upcoming new album will be the first for STEREO NASTY working and recording as a full unit in the studio and should really help to fine tune their sound.

Recording duties will once again be handled by Michael Richards of Trackmix Studios in Blanchardstown, Dublin where they originally produced the EP. The band are hoping to finalize dates for the recording of the album very soon and are looking at a release date it in late 2014 / early 2015.

Those of you, like myself, who can’t wait that long will have their appetites whetted around July/August as yours truly will be airing an exclusive pre-production track on The Cranium Titanium show first. So keep watching this space as more updates will follow in the upcoming months. And remember…!!!  Stay Nasty!!