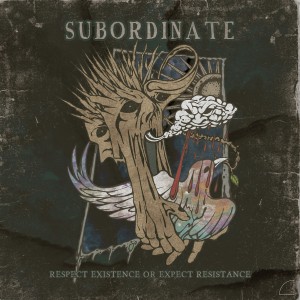 SUBORDINATE from Enniskillen in the North West of Ireland are set to release “Respect Existence Or Expect Resistance” their debut LP this summer on Distro-y Records.

Hailing from the depths of the Irish North West, SUBORDINATE breath new life to Irish hardcore scene showing there is more coming out of this Island than what the crust stronghold of Dublin has to offer. “Respect Existence Or Expect Resistance” will be SUBORDINATE first full length having unleashed a 12″ EP “To See Their Demise”. Evolving their sound into a lengthy crushing discernible force that grasps to influences from Spanish crust bands like EKKAIA and MADAME GERMAN over an inherent Irish crust sound creating hardcore contortion overriden by politicalised lyrics through contrasting battling vocals.

“Respect Existence Or Expect Resistance” was recorded in The Hive Studios w/ James Eager. And mastered by Enormous Door FX with artwork by Costin Chioreanu.

News in from Distro-y Records…
“The LP is currently sent off for press with hope of returning for July release. We have one track currently up to stream ‘Money Talks, People Perish’ For those of you who do not know SUBORDINATE think along the lines of EKKAIA, FALL OF EFRAFA and EASPA MEASA. The record which features artwork by Costin Chioreanu will be released via Distro-y Records, Chainbreaker Records(Chris from SUBORDINATE‘s label), Anarchotic Records, A World We Never Made Records, Don’t Live Like Me Records, Suburban White Trash Records, Pumpkin Records and also on Cassette via Soleman Records and Chainbreaker Records.”