Kildare/Carlow based Stereo Nasty have burst out of the traps and hit the ground with their recent three track demo. Initially only offering up one track ‘Under Her Spell’, the band quickly followed the online buzz it generated with ‘Demon Halo’ and ‘The Warriors’ soon after.

The Classic 80’s retro vibe simply oozes out of every riff and note played. Pick your legendary metal band from that decade, W.A.S.P., Accept, Mötley Crüe, Judas Priest,… and you’ll find their influence in one or all of the three tracks. Fans of Steel Panther will lap it up. But where Steel Panther have taken the humorous approach to this style, Stereo Nasty take it more seriously. Despite taking their queues from one of the ‘cheeziest’ eras in heavy rock/metal, the band have left their cheap and cheerful easy-singles at the door.

The music is perfectly crafted as an homage to the heroes of Classic Metal. The drums, bass and guitars are solid and consistently pumping and the vocals are reminiscent of the mighty Blackie Lawless and exude just the right amount of machismo and bravado to pull of the whole sound. I can’t imagine any true metal fan not banging their fist in the air for the duration of this demo. This is a highly recommended release. Go check it out and download for free from the Stereo Nasty bandcamp and soundcloud pages…

The tracks were recorded by only two members, Adrian Foley and Mick Mahon. But they are planning on gigging and hitting the studio again to record their debut album and are currently looking to fill out their line-up. At present they are looking for a new permanent bassist. See their official announcement below… 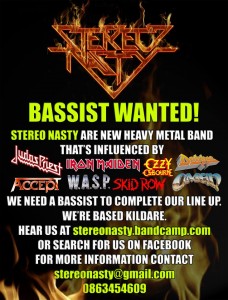 We’re a new classic/ 80s style heavy metal band. We recently made a demo as a two piece and now we’re putting a full line up together so we can play live, make an album and get things moving. We have everything except a bass player. We’re based in Kildare and Carlow.

We want someone who…
-wants to be in a hard working, gigging, touring, recording band.
-has a love for anthemic 80s metal.
-has no problem wearing denim, leather and spikes.
-is aged roughly somewhere between their early 20s and late 30s.

Experience and the ability to sing backing vocals would be a big help too.