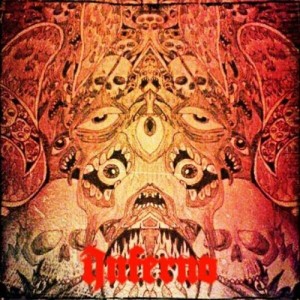 SPIRITS OF MALICE is a solo instrumental project from DIRGE IN EXTREMIS guitarist, David Baker. All the instruments, music and recording is DIY by Baker himself and while a little rough around the edges, it’s a far cry from the harshness of his other Black Metal band. The limited five track ‘Inferno’ CD was DIY released earlier this year in February 2014 and sold out pretty quickly. But work began immediately on it’s follow-up and companion ‘Inferno – Part II’.

The first track to be aired was ‘Sinsanity’ at the beginning of April 2014. A chaotic, mixed bag that weaves and meanders through a maze of riffs, bass rhythms and lead guitars. A hard track to pin down, but given some attention it soon takes hold of you.

The latest offering from the project is ‘Abyss’ which Baker has put up on Youtube. Maybe it’s just the track name influencing me, but this one has a slight ‘Seasons In The Abyss’ feel to it at times, particularly after the opening section. But the chaos between the riffs, bass and leads soon worms it’s way back in. A good taste of what’s in store for the next release.