Dublin death metallers SKEWERED are back and set to release their second full-length album through Stillbirth Records, a division of Gore House Productions.

Hailing from Dublin, Ireland, SKEWERED came into fruition in 2006 under the moniker NECROSIS. After self-releasing 2 demos, their vigorous work helped capture the attention of Inherit Suffering Records, who later released the bands self-titled debut album in 2012. 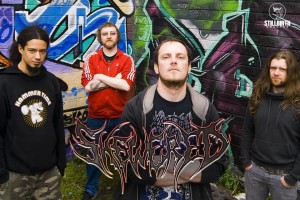 “We’re delighted to finally announce our 2nd album is set for release later this year”, states guitarist Andy Sweeney. “Stillbirth Records, a division of Gore House Productions have signed us up on a 2 album deal. Some of the cool bands they’re working with include PaRtY-CaNnOn, Mortal Torment, Stages Of Decomposition, and so on. We will be working closely with Stillbirth Records / Gore House on all the updates on this so keep an eye out on both pages over the coming months.

Original bassist Salvador Maguire has also been welcomed back into the fold once again for the recording of the bands second full-length album and gigging to promote the release, but a permanent replacement for the position as well as a 2nd guitarist are currently still being sought by the band.