IRON MOUNTAIN don’t fall directly into the ‘Rock & Metal’ category. And on first listen, you’d be forgiven for asking why the hell they’re even featured on this site, what with the jazzy elements and all the various flutes and uilleann pipes used abundantly throughout the bands debut album, “Unum”. But the truth of the matter is that once you look past all that, at their core IRON MOUNTAIN are a fantastic post rock collective who have decided to pave their way and create something that is pretty much unique and completely their own. 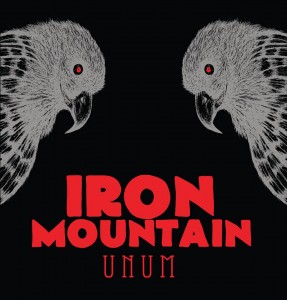 With only five tracks, “Unum” is still lengthy enough at almost fifty minutes. The album opens with the track ‘Bonfires’, the first half of which with it’s very sombre tone creates an air of intrigue and gets you thinking, “Where is this leading to…?”. And the latter half with the full troupe of musicians getting more involved to expand on the track and built to a full on post rock climax and really show what IRON MOUNTAIN is all about. This is followed up by ‘Enthralldom’. A moody slow burner with plenty of little intricacies littered throughout by all the players with the flutes and pipes complimenting the more traditional rock instruments perfectly. The tracks takes a slight change in tack around the half way mark, shifting gears up and down before being guided to it’s final act by a clever bass line from Steve Hughes that brings to mind OZZY‘s ‘No More Tears’. So don’t tell Bob Daisley! ‘Blitz’ is the shortest track at just shy of six minutes and also the most straight forward rocker in the bunch. Although in saying that, they still throw everything at it, including some well placed quirky, jazz saxophones similar to those in ‘Stories’ by THERAPY?.

The latter half of the album is comprised of two of the more experimental tracks on “Unum”. Given it’s name, ‘Powow’ has a definite Native American feel to it, particularly the opening and closing mellower parts. But the track has so much more to offer with tonnes of atmosphere and various elements ranging from trad to stoner/desert rock and even 70’s prog courtesy of Damien Mullane’s riffs. The albums closer is the outstanding ‘Opium’ and also the longest track on “Unum”. Slightly shorter than the live version record in the Franciscan Friary in Limerick back in 2012 that served as the first real taste of what IRON MOUNTAIN was offering. But what a closer it is! A very subdued and atmospheric number for the most part, but still a mammoth undertaking that weaves about and washes over you in waves.

“Unum” is a very different kind of rock album. And certainly not one that I expected to get so much enjoyment out of. As soon as you hit the play button you’re engrossed and captivated by the whole experience. And with repeated listens you find more subtleties that you hadn’t noticed before. IRON MOUNTIAN are playing a few dates around the country this month. So I urge you to do yourselves a favour and go check them out! Buy this CD! And support a truly unique band who are playing by their own rules and setting a new standard for progressive music in Ireland.