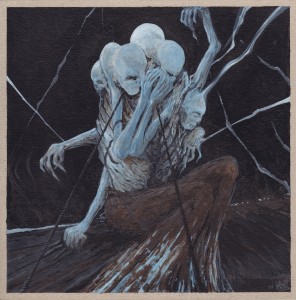 The Long Awaited Follow Up To 2009’s Superb “Cascade” is finally upon us. ABADDON INCARNATE have never ceased to amaze me and it’s no different with this album, “Pessimist”. From their inception as a raw and filthy blackened Death Metal powerhouse the band have become a Death/Grind juggernaut that shows no sign of stopping.

The first four tracks (‘Pessimist’, ‘Aborted Genesis’, ‘Yester Hara’ and ‘Warping The Necro-Spawn’) are like an audio assault to the senses and they perfectly encapsulate the unpredictable greatness of this album. ‘Broken Spectre’ has a nice blend of Death Metal mixed with Grindcore in the vein of TERRORIZER, NASUM and NAPALM DEATH. And the intro to ‘Fear’ has a killer old school Death Metal riff reminiscent of their very early material. Both of which to me are stand out tracks on this album. The album may be short but it is still completely unrelenting and filled with future live classics such as ‘Nameless Grave’, ‘Undead Outcasts’ and ‘Funeral Hag’.

ABADDON INCARNATE continue to improve and mature with every album they release and the introduction on this album of more social and personal issues have helped them cement their place in the current metal scene for a long time to come, yet. I just hope they can keep adding something fresh with every release.

MOLER.
(By The Way Happy 20th Anniversary to the band and long may it continue.)