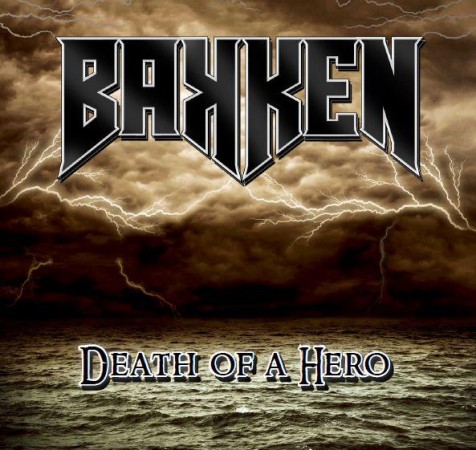 Album Plays: 6
Track Name
Track 1/8
/
Streaming from Bandcamp
Update Required To play the media you will need to either update your browser to a recent version or update your Flash plugin.

Editor Notes:
This album absolutely kicks my ass. Just can’t get enough of it. I’ve given the first two pre-release tracks a good listening too over the last couple of months and was well impressed. Then Simon Pickett got in touch a few weeks back about being featured here on the Archive and passed on download links to the full album, which I downloaded with glee and haven’t stopped listening to it since. The album is available for free download, so do yourselves a favor and check it out…!!!
This review of ‘Death Of A Hero’ was originally featured at Drop-d.ie…!!!

Ah!!! The trusted old air-raid siren intro. It never fails to set up an air of anticipation, and indeed expectation of something at least half decent to follow. And BÄKKEN certainly don’t disappoint. Most bands would be tempted to separate out the intro section to bump up the track count, but not these lads. As that’s one of my pet peeves, they’re off to good start before any proper music is even aired. Almost two minutes in and ‘Darkest Day’ begins proper with thrashy, power metal riffs and leads dominating most of the track. At over 8 minutes in length it’s an ambitious opening track, but ultimately it does the job and keeps the listener engaged throughout.

Some may be aware of previously released tracks which follow next. As these were the first two tracks to be officially released online for the build up to the album release, they are quite familiar at this stage. Excellent showcase tracks that more than adequately displayed the bands range and ability. There’s an 80’s metal/hard rock vibe to ‘Mystic Mogul’ again with a thrashy edge, while ‘The Cursed’ has an outright 80’s thrash feel to it. ‘Sasquatch’ is the final album pre-release track that preceded that album. It’s an absolutely blinding metal track from start to finish. The opening section (and used again later on) is reminiscent of JUDAS PRIEST’s classic ‘Painkiller’. Right down to Travis Smith drumming and the trademark Tipton/Downing style riffing, pinch harmonics and dive bombs. And just as you think you have them figured out they take a welcome detour during the solos to pay homage to THIN LIZZY with Celtic tinged harmonised lead guitars. Easily one of the albums highlights.

Simon Pickett’s vocals are on top form for tracks like ‘Back To The Future’, ‘Get Back To Your Feet’ and ‘Fortress Of Evil’. They remind a little of TRIVIUM’s Matt Heafy for the most part, but thankfully without the clichéd Hetfield-isms. Likewise! Where TRIVIUM have taken the classic METALLICA formula and updated it for a modern audience, BÄKKEN have done similarly for a whole host of classic rock/metal bands from NWOBHM to Power Metal to Thrash.

It’s the guitar work that stands out on top, however! Most of the solos and lead guitars have an early IRON MAIDEN Smith/Murray influence to them. ‘Back To The Future’ and ‘Get Back To Your Feet’ are perfect examples. In fact! Name a classic 80’s metal band/album and you’ll almost certainly be able to find it’s influence seeping through the speakers as you spin this album. MAIDEN, PRIEST, METALLICA, THIN LIZZY, MOTLEY CRUE, HELLOWEEN, SCORPIONS and more… they’re all in there, but with enough of a modern take to keep it fresh. They’ve taken all the best parts of those bands, boiled them up in a big ass metal cauldron and the served it up as ‘Death Of A Hero’. Closing track ‘Voyage Of Aodh’ epitomises this perfectly with touches of all their influences shining through at one point or another. The bass during this track is excellent and really stands out compared to previous tracks. At times laid back and understated. Driving and aggressive where necessary. Then melodic and distinct such as during the solos.

I can’t recommend this album enough! It’s an album that old-school metal-heads and newer converts will find appealing. And if there’s any justice, BÄKKEN should see themselves being garnered with much deserved praise and notice off the back of this release. The album is being exclusively released on Metal Ireland on 16th August 2012. It will be available for free download.