The Cork Community PrintShop is a collectively run screen printing facility located in the heart of Cork city on Oliver Plunkett Street Lower (behind the bus station), with merchandise printing, t-shirts, artwork, gifts and the Art For Blind independent record shop all under one roof. On top of all this they have also set up a rehearsal space which doubles as a bespoke and very limited live event venue. Which is where Dublin’s latest Death Metal miscreants, ZOM and MALTHUSIAN, have decided to unleash their attack on the Peoples Rebublic…

Tickets were very scarce to begin with as only 40 were made available to buy due to the limited nature of the venue. Needless to say it sold out very quickly and demand was high for any spares floating about in the run up. Upon arriving, the atmosphere was very laid back. Most punters just hanging about chatting, browsing through the various print items and music for sale and supping away on their BYO cans and bottles of their choosing. A dedicated merch stall from Invictus Production, of which the two bands are affiliated, was also on hand with plenty of die-hard metal goodies on offer.

First band up was MALTHUSIAN, with blackened eyes (or dodgy mascara!) and shrouded in black hoods. A local ‘supergroup’ (if you will…) consisting of members who have been and are currently in some of the countries best metal acts. Namely! MOURNING BELOVETH, WRECK OF THE HESPERUS, ABADDON INCARNATE, ALTAR OF PLAGUES, ON PAIN OF DEATH… and many more! It’s a short enough set, but the tracks from the bands 2013 demo are delivered in bludgeoning fashion, as was expected. The band shift from slower Death Metal drudgery to manic blasting in the blink of an eye. And their use of simple techniques such as slow sliding chords combined with each of the three members up front contributing vocals, all adds perfectly to the live assault. A hugely enjoyable set that left everyone in attendance wanting more. Definitely a band to watch for. Already an important fixture on the local scene, and sure to become so further afield also.

ZOM, on the other hand are very different type of animal. Another ‘supergroup (again, if you will..) with members also involved with DREAD SOVEREIGN, CROWD CONTROL, WIZARDS OF FIRETOP MOUNTAIN and DE NOVISSIMIS, among others. they’re a difficult band to really pin down. Their demos and single over the last couple of years, while being good for the most part, can be a little difficult to get your head around fully. My first opinions of the band live was at the 2012 Burning Oak Festival, also here in Cork! And I found their excessive use of delays and reverb to be far too distracting. Thankfully they reigned all of that in for this performance and made a much better impression this time round. The band literally tore head-long into their set and spat, spewed and shat their array of tracks at the front row. Definitely a much tighter display this time round, but there’s still just something missing! And for all the hype behind ZOM, I for one don’t really get why.

The only real complaint on the night was that the headline act only played for about twenty-five minutes. A ridiculously short set for a headlining act. If the bill was the other way around with ZOM starting, it probably wouldn’t have been noticed as much. The band just finished and started packing up just as everyone was getting warmed up. Seemed very strange indeed. But on the plus side it gave some folks a decent chance to catch the last bus home.

Overall, though! It was a great evening of live and homegrown metal entertainment. The banter was great and the whole event was really relaxed and went off brilliantly. And I really hope the Printshop can make a proper go of things. The location is perfect and the potential that the unit has is huge, with a massive space upstairs that needs a lot of work but could easily lend itself any number of possibilities. Rehearsal rooms, craft workshops, or even make a perfect and badly needed live venue for various DIY and undground events. 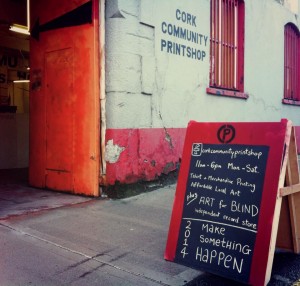 The Cork Cummunity Printshop has made an open invitation for anyone who might be interested in becoming involved with them. They want to expand on huge space available to them and are actively looking for anyone that may have creative ideas for the space going forward. Areas they are interested in exploring include…

– setting up and curating an exhibition space
– a darkroom
– a café / social space
– retail outlets, particularly in the creative sector
– classes / workshops