SLAYER and ANTHRAX… Live at the Marquee last Wednesday. (All Pictures by Miki Barlok)

It’s not often we get treated in Cork to some really big names from metal world, so when none other than SLAYER were announced to play once again on one of the nights of the famous ‘Live At The Marquee’ festival, the whole City and County went into a bit of frenzy. And to make the occasion even sweeter, it was also announced that their fellow BIG 4 compatriots ANTHRAX would be playing alongside them as special guests, which no doubt added to the trickles of excitement running down many a leg.

Marquee shows are always an early affair and with ANTHRAX set to take the stage at 7pm a horde of early revellers, myself included, made our way down Monaghan Road to the Páirc Uí Chaoimh Showgrounds where the annual festivals Big Top tent was looming large over the Lee. The closer we got, the darker the clouds rolled in… and just as the bulk of the droves began their entry to the grounds the sky opened with torrential rains and multiple streaks of lightning and booming claps of thunder. A portent to the intro to the headliners classic ‘Reign In Blood’, perhaps? Regardless! Everyone got absolutely drenched as they scurried like rats into the beer tent. 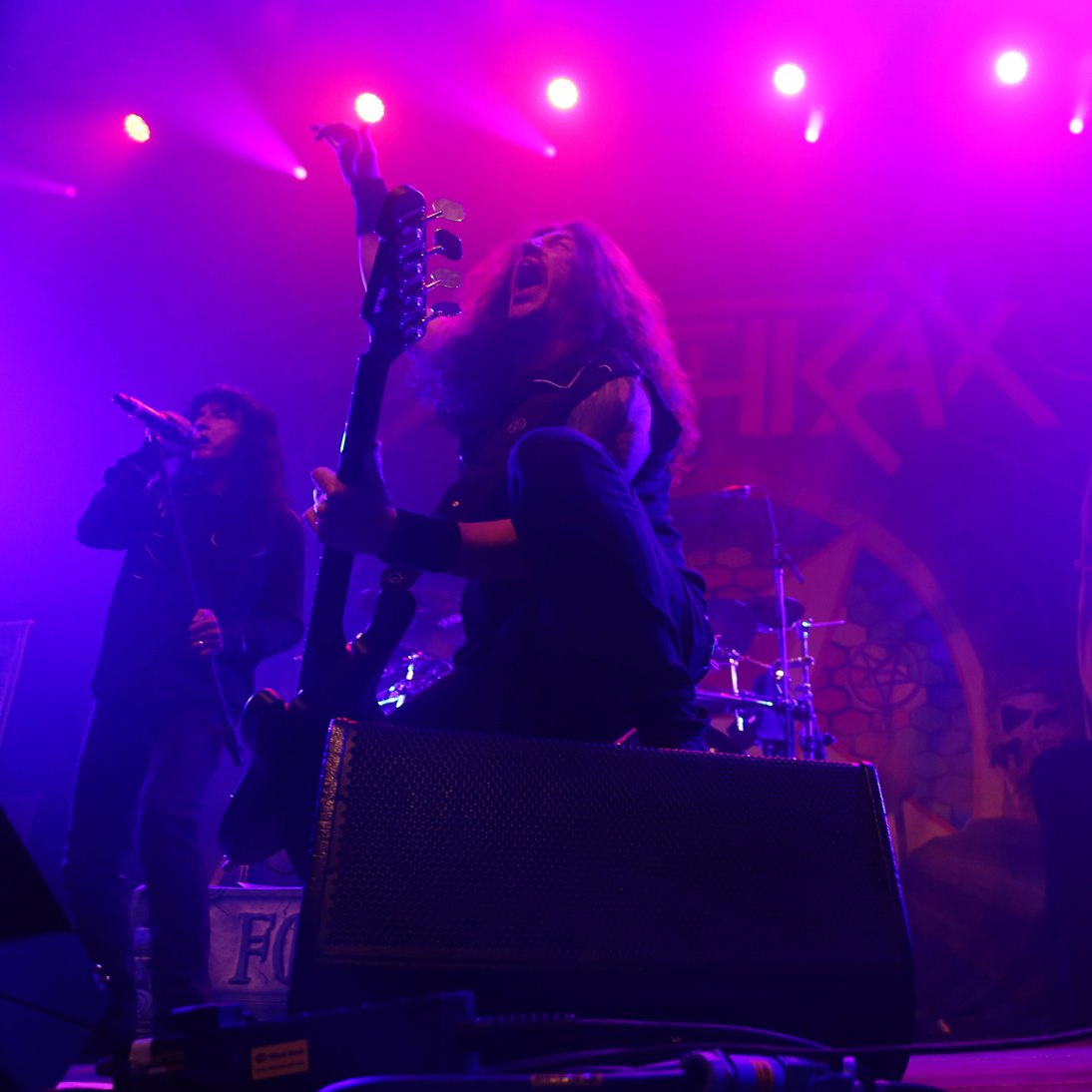 Inside, the early gatherers filled their bellies with as much beer as possible in the brief time available to them before ANTHRAX were due to kick off.  The early start and the shockingly bad turn with the weather meant that most of the crowd were still making their way in as ANTHRAX took the stage. But it didn’t take long for the sound of the band launching into ‘You Gotta Believe’ to put a fire under them. The band were in flying form running out onto the stage and keeping their energy levels topped up throughout their set. Joey Belladona and Frank Bello in particular, continuously engaged the crowd and newest member Jon Donais did his part headbanging and windmilling to the faster pieces.

Classics such as ‘Caught In A Mosh’, ‘Madhouse’, ‘Indians’ were aired as well as staple covers of TRUST’s ‘Antisocal’ and JOE JACKSON’s ‘Got The Time’. As well as newer material from the two most recent albums such as the aforementioned opener, ‘Fight Em Till You Can’t’, ‘Evil Twin’ and ‘Breathing Lightning’ being a particular highlight of the newer bunch. So set wise the band kept it to only tracks lifted from albums that Belladonna sang on, which is fair enough seeing as they were playing support tonight. But part of would have loved to have heard something from “Sound Of White Noise” or “We’ve Come From You All”. But it’s a minor complaint.

A brief respite before the headliners and every SLAYER fan south of Kildare seems to have emerged from their respective crypts, as is evident by the crowd after gathering in the beer tent. A five minute warning was announced over the PA and so began the mass migration of black, sweaty beasts into the main tent. Opening with the title track to the band’s latest album “Repentless”, SLAYER hit the Marquee in top gear and rarely take their foot off the peddle for the next ninty minutes. 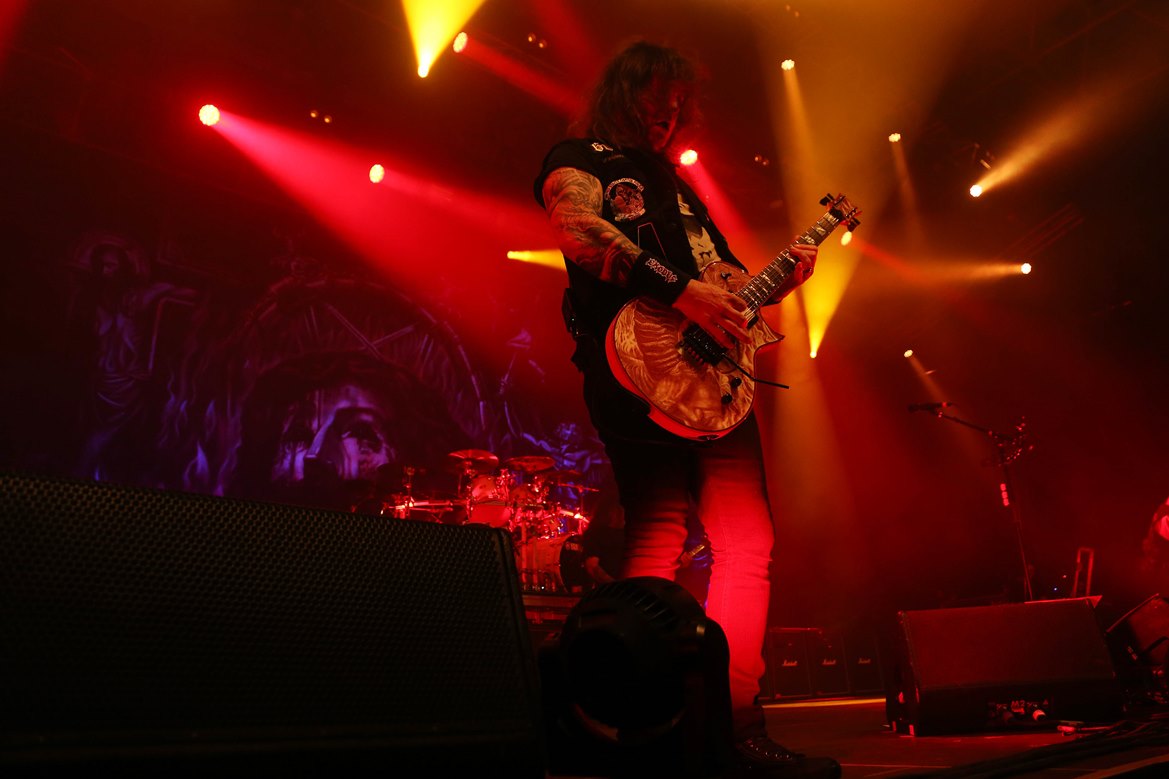 EXODUS axeman Gary Holt takes up his position right in front of where I’m standing and proceeds to blow me away for the whole set. Hardly the new guy at this stage, the difference he’s made to SLAYER‘s live show in the last few years has to be commended. Not only filling in for and eventually replacing the legendary Jeff Hanneman [RIP], but truly adding his own stamp to the current band setup also. Doling out classic riff after riff as well as shredding like a man possessed, it was an absolute treat to witness his performance up close and personal.

Their setlist comprised of a fair chuck of tracks from their latest album as well as most of the bands most popular MTV classics such as ‘War Ensemble’, ‘Seasons In The Abyss’, ‘Dead Skin Mask’, ‘Mandatory Suicide’ and  ‘South Of Heaven’. As well as a couple of choice early “Show No Mercy” cuts in ‘Fight Till Death’ and one of the nights personal standout tracks ‘Die By Sword’, which was a real treat to witness live for the first time. The pit in front of the stage was pretty much seething throughout the full performance. But it was the lethal salvo of ‘Reign In Blood’ and ‘Angel Of Death’ that received the biggest cheers of the night and resulted in multiple pits opening up throughout the Marquee for arguably two of the greatest metal tracks ever penned.

The sound was pretty decent over all, but not great. Drums were a little muted for both bands and didn’t have the presence they deserved which was a shame, given the talent behind them for both acts. But the guitars in particular were the biggest flaw on the night, with them being panned far left and far right depending on which member was on that side of the stage. Not that huge problem for ANTHRAX, but it was glaringly obvious for SLAYER. Luckily! I was on Gary Holt’s side of the stage and he was more than up for carrying the guitars, to these ears. And like wise with Kerry King on his side of the stage, if other accounts are to be trusted.

And with that it was all done and dusted. The minute hand has barely knocked past 10pm and the hordes head back out of the Showgrounds as they sink back under their rocks or back into their hiding places until the next big metal outing will lure them out once more. Lets just hope that we don’t have to wait another few years for a big metal act to grace the Marquee again.