There’s an enigmatic bar in the heart of Dublin City that only comes to life at night. With almost vampiric tendencies, it feeds on the energy of its inhabitants in order to sustain its own life. When the sunlight arrives, the aptly named Voodoo Lounge seems to return to its dormant state, waiting for another chance to take advantage of the darkness. It was within the walls of this old run down building that British thrash giants, EVILE, set up for their ruthless barrage of speed based metal as the premises became filled to the brim with black t-shirts and sleeveless blue denim jackets.

The evening opened with a set from Northern Irish act, SCIMITAR. This Belfast based four piece began with a swell of cymbal clashes and frantic strumming to raise the noise level within the venue, preparing for the imminent arrival of the blast beat that would set the tone for the rest of the evening. With an interesting guitar crunch that gave the band an almost industrial twist to their personalized blend of thrash, Scimitar dove head long into their 30 minute set. There were some stand out moments and fantastic tempo changes to be heard here. A choice selection of stops and punches provided a hefty sound which gave drummer, Ryan Atkin, the chance to display some excellently thought out and executed techniques. Unfortunately though, the band seemed somewhat held back by their lack of stage presence. Lead singer, Johnny Gray, would often burst into bouts of enthusiastic, whirlwind head banging during the instrumental breaks, but almost seemed to somewhat lose interest when it came around to laying down verses of his gritty vocals. However, SCIMITAR had no problem moving the crowd and creating a great start to the night’s festivities.

Locally based thrashers, PSYKOSIS, claimed the second spot on the bill and took hold of it with both hands. Based in the Dublin area, this four piece act produced a classic 80s sound reminiscent of that popularised EXODUS and NUCLEAR ASSAULT. With a light hearted attitude, PSYKOSIS sped through their hugely energetic set. Catchy vocal lines from high pitched singer/guitarist, Grant Walsh, and tremendously fast riffs with sharp, vicious lead breaks provided a truly enjoyable thrash experience. It was clear from the opening note that this band fully intended in providing a fun atmosphere around their music, and this was proven on numerous occasions between songs by way of on-stage jokes and amusing anecdotes. Although the band worked together terrifically as a unit, it was rhythm guitarist, Tony Corcoran, who was the driving force being the band’s persona, creating hilarious interludes throughout their strong, ferociously fast set. PSYKOSIS are the type of band that hit hard and fast, leaving their audience begging for more.

The event’s headlining act, England’s EVILE, prepared on stage as the Voodoo Lounge’s dark interior enveloped the crowd. The band were touring their fourth record, “Skull”, which had been released in 2013 and were set to blast their way through the whole thrash metal outing in its entirety. EVILE took off with the album’s opening track ‘Underworld’, a song that perfectly demonstrates many of the band’s traits. A barrage of rhythmic drum rolls and cymbal punches from Ben Carter, accompanied by equally accurate picking gave way to Carter’s initial blast beat as ‘Underworld’ dropped comfortably into its fast paced tempo. The other musicians followed suit with full frontal assault to bring the song from its calculated introduction to its chaotic main verse riff. Within seconds the atmosphere within the venue transformed from a feeling of anticipation to erupting with energy as a number of mosh pits broke out at the front of the stage.

From here EVILE skipped forward, breaking the record’s track listing up to suit their needs in a live environment. The slower, chunky main riff from ‘Words of The Dead’ came crashing out of the speakers, bringing with it an undeniable groove which caused the crowd to rock and sway to the British act’s every command. The bass driven riff was propelled by Joel Graham, providing the signature bounce that one would associate with the likes of METALLICA’s ‘Leper Messiah’ backed by Matt Drakes chants of the song’s title during each chorus. This powerful, steady tempo almost felt fresh amidst a night of music that was constructed for speed. 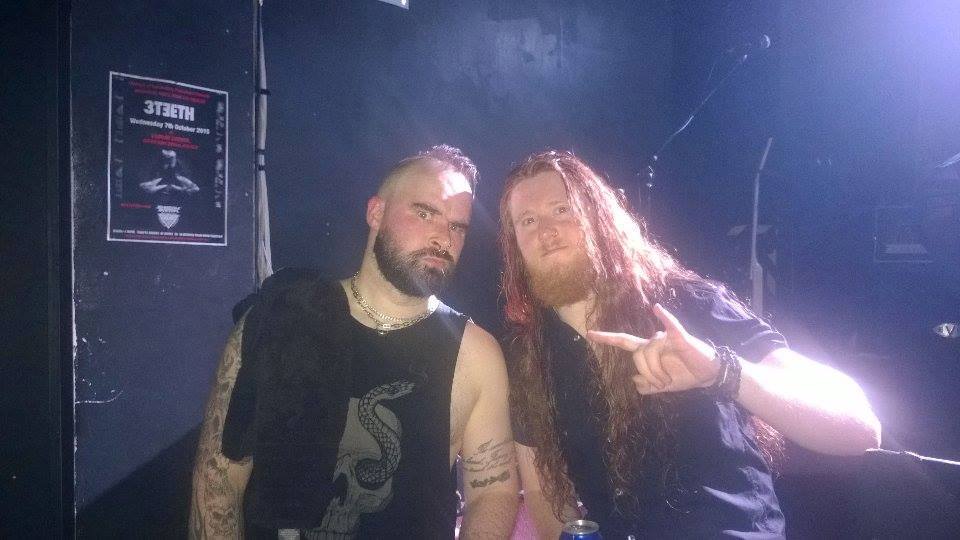 Taking a break from their latest record’s material, EVILE unleashed the title track from their debut album, 2007’s ‘Enter the Grave’, to bring the show cascading back into the realm of thrash. This caused a something of a flux in the audience as the older fans moved forward, pushing the younger fans aside, to take their positions at the front and centre for the duration of the track. This track is built on the shoulders of 80’s thrash juggernauts to create a brutal beating, complete with relentlessly fast passages and chugging verses to prove that the new wave of thrash metal is a monstrously powerful force. This power could be felt throughout the track and the band tore through it, ripping away at each note and using them as aural ammunition.

Following their brief return to their roots, it was time to indulge in more music from the “Skull” album in the form of the epic seven minute track, ‘Tomb’. Again, it was easy to see the METALLICA influence on this one. The soft, clean opening was hugely reminiscent of the tracks like ‘Welcome Home (Sanitarium)’ or ‘Fade to Black’. This feeling was heightened even further by Matt Drake’s early Hetfield style vocals that can be heard throughout all of their work. The steady progression and constant building of intensity in Tomb comes to a head when the band break into a fantastic steady mid-tempo riff, allowing new member, Piers Donno-Fuller, to solidify his place within the band by means of incredibly tight lead guitar work and a number of beautifully played clean solos.

Other classics from ‘Skull’ ensured that no fan of the new album went home unhappy. Fun, driving tracks like ‘Head of the Demon’ gave the crowd the chance to join in on the sing-along style choruses while full, blisteringly aggressive songs such as ‘The Outsider’ tore through the venue like storm of anger, sweeping the audience along with it. The rhythmic thunder of ‘New Truth, Old Lies’ provided a perfect contrast to more melodic material like ‘The Naked Sun’. Their current record’s title track, ‘Skull’, was played with such power and intensity that it was easy to see why this track’s name graced the front cover of the album. Again, fast passages dominated this song alongside fantastic momentary stops that acted as slingshots to push the song further at full speed. However, it was the lengthy, almost tribal, build up that makes it the monster that it is. The long wait, drenched in anticipation, left the crowd desperate for the blast beat’s arrival. The preparation for the drop could be felt in waves as EVILE mercilessly stacked the riff to an enormous height before finally given the crowd what they been anxiously awaiting.

To finish the show, EVILE touched on each of their older records with a few classics such as ‘Infected Nation’, ‘Cult’, and ‘The Thrasher’. Along with bands like HAVOK and Ireland’s own GAMA BOMB, EVILE are providing metal with a much needed injection of thrash from a younger source. Brought up on the extreme music of yesteryear, it’s both interesting and amazing to see what these newer bands can create from a genre that much of the world believed to have run its course by the early 1990s. EVILE are bringing thrash to a younger generation not only by pushing the genre forward, but also by playing shows to over 14s audiences as opposed to just over 18s and allowing younger metal fans to experience this style in a live environment. It’s also worth mentioning that tickets for this show cost less than the entrance fee to most pub cover bands in Ireland. EVILE’s show at the Voodoo Lounge brought thrash back to its origins; it was fast, tight, full of energy and played at insanely high volumes in a venue that exist only to facilitate fast, loud, energetic music.