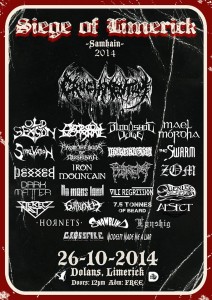 Taking place twice a year on the Sunday of each Easter and October Bank Holiday Weekends, The Siege Of Limerick festival is one of the most anticipated events on the Irish Metal calander. And with the next ‘Samhain 2014’ installment rolling around once more on Sunday 26th Ocober, the city will once again be set upon by hairy, bearded hoardes of metallers hungry for their beer-fueled fix of all things heavy.

So! In anticipation of the upcoming festivities, the Irish Metal Archive has taken it upon itself to hand pick a few of the participating acts to poke a stick at and see how they react!

First up is STEREO NASTY! One of the newest acts to hit the local scene and if their projected trajectory remains on course, they will surely be one of the hottest of tickets once their debut album hits the shelves. Their brand of balls out 80’s retro heavy metal is the type of riff-laden meat’n’potatoes that many of us grew up listening to and cut our teeth on back in the good old days.   \m/ 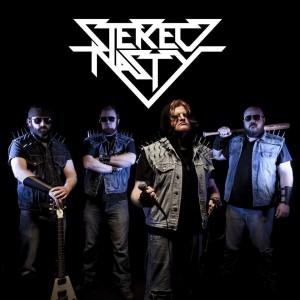 Hey! Adrian…
Thanks a million for taking the time to answer a few questions for the site.

Firstly! I know you haven’t been going that long as a full band. But can you give us a history of how it all started for STEREO NASTY and how the current, complete line-up came together?

Sure, I’ve been a metal fan for over twenty years now and no matter what genres or sub-genres I’ve gotten into in that time, classic / anthemic / 80’s heavy metal has always been the one constant that I’ve come back to. Oddly enough though, I’ve never been in a straight up heavy metal band before now (check out THE JIGSAW MURDERS and THE 8TH DAY). Mick Mahon and I were in a female fronted rock band before STEREO NASTY and towards the end of that band most of our practices were spent jamming on JUDAS PRIEST and ACCEPT songs.

When that band split it just felt like it was time to cut the bullshit and just start an all out heavy metal band. I came up with the music for some songs and asked Mick if he would sing. From there we made a 3 song demo at Trackmix in Blanchardstown. We figured that if we put a good demo together it would help us get more interest from potential band members. Mick got in contact with Fran and luckily he had already heard the demo and was interested in jamming. Fran Moran used to play in GROUND OF RUIN and we knew that he was the calibre of drummer that we needed to bring the songs to life. Rud Holohan was in a band with Fran back in the day and one night he turned up to practice and knew all the songs and that was that, we became a band.

You mentioned JUDAS PRIEST and ACCEPT before and STEREO NASTY has a definite 80’s buzz about the band. What bands would you cite as influences?

We listen to all kinds of stuff but the biggest influences for us would be classic 80’s metal bands like JUDAS PRIEST, ACCEPT, IRON MAIDEN, W.A.S.P, DOKKEN, OMEN and SCORPIONS. Back then bands had their own personalities and identities and I’d like to see our band with its own style and sound rather than a join-the-dots of 80’s metal. I like to think that we blur the lines a bit too. Like when you see a battle jacket from back in the day that has a WHITESNAKE patch beside a MEGADETH patch and a TWISTED SISTER patch beside a METALLICA patch. I love that. I think that’s way more exciting than the old thrash vs glam chestnut.

I could point out parts of our songs that were influenced by RATT and DOKKEN and I could point out parts that were influenced by “Ride The Lightning” era METALLICA. Personally I also love 80’s revival synth/dreamwave stuff like POWER GLOVE, LAZER HAWK, ACT RAZOR and PERTUBATOR. The way that music gives me nostalgic goosebumps is something I try to capture in STEREO NASTY riffs.

“Nostalgic goosebumps…”, indeed! When I listen to your ‘Demo’ tracks I’m instantly taken back to my teens and getting into the classic bands you cited all over again.
You don’t have any physical product available yet, but your three track ‘Demo’ has been available online for a while now. How has that been received by the metal community?

The response has been fantastic. You have to remember that the demo was never meant for official release. It was just intended to be something that we could use as bait for band members. We were only going to release ‘Under Her Spell’ to the general public but the reaction to that song was so good and got so many people talking about us that we had to release the other songs too. People seem to really like it. We’ve gotten messages and downloads from all over the world. Not hundreds and thousands of them but enough to make us realize that people want to hear more from this band. I think we’ve managed to strike a chord with some of the older guys that experienced this music the first time round and also with the younger generation.

You have a full albums worth of material in the works too. Some recent pre-production tracks have been recorded which I have heard and can confirm are brilliant! When can we expect the album to hit?

We have the songs and we’ll be returning to Trackmix in December to start recording the album but I don’t have a release date. I hope we can find a label that want to put it out but if we can’t we’ll put it out ourselves.

You’ve also managed to get yourself on a couple of decent support slots for some upcoming gigs. How has that come about without the band having played any gigs as yet? Is it simply down to the quality of the demo tracks being pushed on the right people?

Yeah! Like I said, the reaction to the demo was fantastic. When it comes to these things though I think there’s a lot to be said for approaching people in the right way and for having a hard neck.

You’re also playing at the upcoming Siege Of Limerick which is coming up fast now. Are there any other bands you’re looking forward to seeing at the Siege? 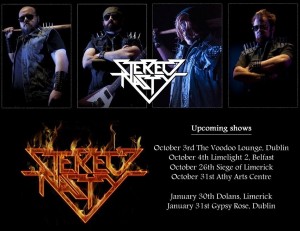 The Siege has such a killer line-up this time that I’m just looking forward to having a few beers and enjoying the day. I’m looking forward to seeing ZOM and hearing material from their forthcoming album. Both OLD SEASON and MAEL MÓRDHA will be there with their new singers so that’s something else I’d like to see. I’ve heard MALTHUSIAN is a great live band too. But just look at the line-up, I think it’s their best one so far.

I was talking to Jimmy from OLD SEASON about this a while ago. He was telling me how its hard for OLD SEASON to find suitable bands to play with because when you’re a “clean singing” heavy metal band you can feel like a bit of a minority in a sea of black, death, doom and thrash metal bands. On the upside of that though, I think people will see us as breath of fresh air and something different. I’m very happy with the bands that we’ll be playing with over the next few months. We have our first six gigs lined up and everyone is with great established bands that have released albums and toured on an international level. How could we be anything other than happy? And honestly a good 3/4s of my wish list of Irish bands that I’d like to share a stage with are playing at Siege Of Limerick.

And finally! How do you think our scene is faring compared to other countries?

I think in terms of quality the Irish metal scene has come on in leaps and bounds in the last ten years. When a band like ALTAR OF PLAGUES comes along it changes things and raises the bar for everyone. I think right now in terms of bands that can perform on an international level, Ireland has never been stronger. Its not just the bands though, promoters like DME and events like the Siege of Limerick and Day of Darkness have shown people that if you’re smart and put in the work you can achieve things that people would have otherwise thought to be impossible.

Now whether or not the audience is there to support these bands and promoters is another question. A lot of people seem to be content to support the SLAYER’s and AMON AMARTH’s of the world and remain completely oblivious to the scene around them. And while that’s more of a worldwide phenomenon, I think that because Ireland has a smaller population and is an arguably more conservative society, underground bands and promoters feel it more.

Well! That’s about it, Adrian!
Thanks a million for taking the time to answer these questions. And good luck with the upcoming gigs and the album recording. I’m sure we’ll be hearing plenty more from STEREO NASTY in the coming months and beyond.

Thanks for the interview, John.
I look forward to reading it on the site.