Louth native Clare Cunningham is the lead singer in an all-female Stockholm, Sweden based rock group, THUNDERMOTHER. And seeing as the band are currently touring over in this part of our Continent, we here at the Irish Metal Archive decided to give her a quick call and ask a few questions about the woman herself and the band.

Hi! Clare…
Thanks for taking the time to answer a few quick questions about the band and yourself for the Irish Metal Archive!

To begin with. TUNDERMOTHER are based in Sweden… So How did you, an Irish woman, end up in a Swedish rock’n’roll band? 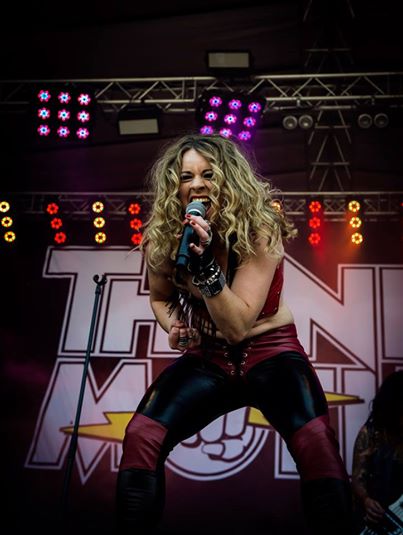 CC: Yeah! I know… It’s the question everyone asks.
Basically! It was through YouTube. About a year and a half ago I got a phone call from Filippa, the lead guitarist for the band. At the time I didn’t even know their name or about them. She said they needed a singer… “We’ve seen you on YouTube. We’ve got a few festivals on in the Summer and we’d love to have you on board”. So my first initial reaction was, ‘OK! This is a bit strange’ as I didn’t know anything about it. I did try to give them a call back but due to the fact that I didn’t really know how it worked I couldn’t get through. So I had to leave it then because I wasn’t really interested as I had my own band in Cardiff, so I was kept busy with them and didn’t have the time anyway.

But through their determination I got a call again the next day and I apologised for not being able to get back to them and said that realistically I wouldn’t have time. But she said, “Well! I’ll just explain a bit about it and I’ll give you some dates and maybe if you have a think”. So I kindly listened and wasn’t taking much note of what was being said, until… At the very end of the conversation, Filippa the lead guitarist said to me, “Well listen! We’ll leave it with you. Our first show is in three weeks. We’re opening up Metaltown 2013 for MOTORHEAD.” And then I was like, “Ohhh!!! Right!… Let me just grab a pen!”.

So I had to get her to repeat a few things. And I went on the website… had a look at the girls… saw that it was all female as well, which I thought was cool. And saw the back catalogue of stuff that they’d all done and realised that actually this was quite a big deal. So! Yeah! I spent three weeks learning ten new songs and they flew me out the day before and then went out on one of the biggest stages in Europe.

So that’s how it all kinda began!

As you said, the band is all women as well. The other members… are they all Swedish?

CC: There’s three Swedes and one Italian, but she lives in Sweden and has done for the last five years now.

It’s a good sign that they were looking at you in particular and kept chasing you down. 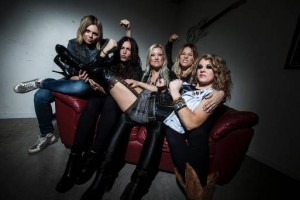 CC: Yeah! Well they had girls come to them and approach them when the word got out that they needed a singer. They had auditions but Filippa didn’t find the right person. She was looking for a particular type of singer and she had people scouting on YouTube for her as well. So as soon as she heard the stuff I had she knew and was like ‘Right! That’s her. And I want her’. And she was determined so she did it. And fair play to her, you know!

You have to admire her persistence, so?

CC: Exactly! It can sometimes work.

And your band in Cardiff, SMOKIN’ ACES. Was it those YouTube clips that got their attention?

CC: That was it yeah! Myself and JD, the old guitarist, we had an acoustic duo that was my full-time job. It was literally a month before I got the phone call that those videos went up and she was looking for someone who could do in the style of AC/DC and luckily we did covers of all the old classic 70’s tunes. And she knew then, ‘Right! That’s what I want.”

Are you still with SMOKIN’ ACES or what’s the story with them?

CC: No! We finished up in March. It was coming to an end anyway. The bass player was going to be leaving and due to other circumstances I was going to be leaving anyway, so it literally came just at the right time. I could have continued on doing solo gigs but I decided to give THUNDERMOTHER the bigger shot, you know! And I thought, ‘Right. I’m gonna packed up, leave and head out and do this.’ You don’t get many opportunities like this, so…!

And what a great opportunity it was?

CC: That’s for sure. Definitely!

So! With THUNDERMOTHER you’ve toured all over Europe and Northern Europe in particular?

CC: Yeah! Mainly Europe at the minute and we’re getting some Japanese labels interested in us now as well, so we’re gonna hopefully head over there next year. Well! That’s the plan, anyway.

The ‘Rock’n’Roll Disaster’ album is doing really well too. I’ve seen it popping up in a few different places online. 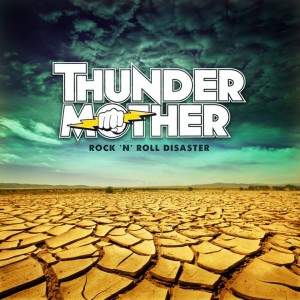 CC: Yeah! Well considering it didn’t actually get a full official release within Europe as it was only officially released in Sweden. We had a little bit of trouble with the label over that and it was beyond our control. And I know that a lot of people were upset that they couldn’t get an actual physical copy of the album outside of Sweden, but it is something we’re working on.

But yeah! It’s done really well. We headed in at #2 in the Rock Charts back in the Summer and in the national charts we reached #26. So for the first album and being an unknown band I think, yeah… it’s quite an achievement. So that was nice!

You can get it Worldwide on iTunes, Spotify and stuff. If you want a physical copy outside of Sweden then there is a website set up for it, but it’s not really ideal for anyone that can’t speak Swedish! It’s been a bit of a nightmare but we’ve learned our lesson there and there’s gonna be some changes.

The album is really great! And the AC/DC vibe of it is perfect!
That’s the only word I can use to describe it. Everything you could possibly love about AC/DC is on the album.

CC: Well! Filippa was like, ‘Oh! It’s getting compared…’. And I said, ‘Come here… you could be getting compared to a lot worse.’ AC/DC were the biggest Rock band in the World, so if you’re going to be influenced by somebody. We’re all lovers of all sorts and styles of music but nothing beats a bit of classic rock’n’roll. Give anybody a three-chord rock’n’roll number and they’ll be happy. It’s timeless stuff.

Well it’s certainly opened a lot of doors for the band, though!

This is the bands first trip to Ireland and the UK, as far as I know! Is that right? 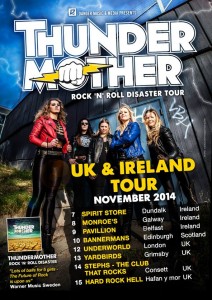 CC: That’s right, yeah! This is our first tour over here. So! Very exciting and very nice that I can actually play in my own hometown. And the girls are very, very excited. And the booking agent had no idea it was up the road from where I lived when he organised the entire tour. So I didn’t even ask. He had gone and done the whole thing then came to us with the dates and the shows.

You’ll have a fair few familiar faces in the crowd, so?

It’s only three dates your playing in Ireland and they’re all up the country rather than farther down South. Any particular reason for this?

CC: Yeah! Well it was all centered around Hard Rock Hell in North Wales. So the way it worked out and the time we had, unfortunately we could only do three dates in Ireland. And Galway actually came in before Cork so because everything had already been organised you have to go with Galway, which is great anyway. It is a shame we couldn’t have done a bit more but it’s not gonna be the last time we come over. There will be other times and we’ll hit Dublin, Cork and other areas.

Well! I’m based down in the Cork area myself so I’ll definitely be looking forward to that one.
Right! So you’ve got the current Irish and UK dates but you’ve also recently toured with Michael Monroe, haven’t you?

CC: Yeah! We’ve just come off that. We did most of Scandanavia. Michael is great! I didn’t know much about him before hand but I did know that he used to be in HANOI ROCKS. That was a fantastic tour we had with him. And we were all really, really, chuffed about that. He’s a really nice guy and full of energy as well. We couldn’t believe a man of his age and lifestyle was still shaking it every night. But yeah! It was great.

You mentioned Hard Rock Hell earlier. That’s the last date on the UK leg of this tour. Isn’t it?

CC: Yeah! We finish there on the 15th or 16th? That’s kinda the big one for us, really. We’ve got a few big names coming down to that to have a chat with us and talk things over. So that’s really the important one and hopefully it goes well and we’re not too tired by the end of it. But I think we’ll find the energy from somewhere, I’m sure! 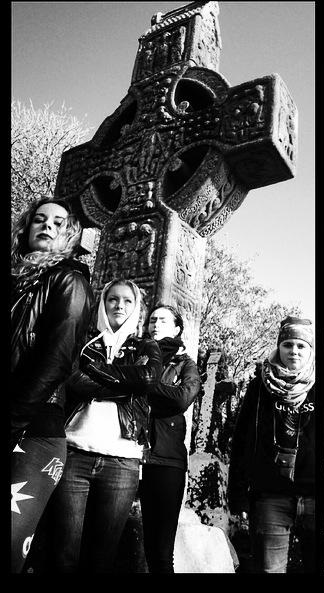 And finally! Any other future plans for next year? What’s the story for THUNDERMOTHER? Will there be another album? Or rehearsing, touring, etc…?

CC: Another album for sure. The second record has been written. The plan was to already have started it now and have it released for early next year. But now it looks like we’ll be starting to record next year and have it out by late 2015. So! Yeah… that’s going to be the main thing that’s happening next year. But it’s also our year to hit all the bigger festivals, so we’re gonna try for Download, Sonisphere, Wacken and all the bigger ones. About a year and a half ago we were hyped a bit and got to  play some bigger festivals, but this year it wasn’t so much as it’s usually every second year. But Sweden Rock, of course, was our biggest to date.

So! Yeah… next year we get the second album recorded and out. And we’re going to be branching out a lot more within Europe and Japan hopefully as well! We’ll be kept very busy, anyway!

Well! That’s about it, Clare.
I’ll leave it at that, so! Thanks a million again for taking my call.
It’s great to see someone such as yourself flying the Irish flag abroad and all the best with everything.

CC: Thank you very much, John.

The band play the Spirit Store in Dundalk on Friday 7th, Monroes in Galway on Saturday 8th and the Pavillion in Belfast on Sunday 9th of November.

Tickets are €10 and are available online or can be bought at the venue.