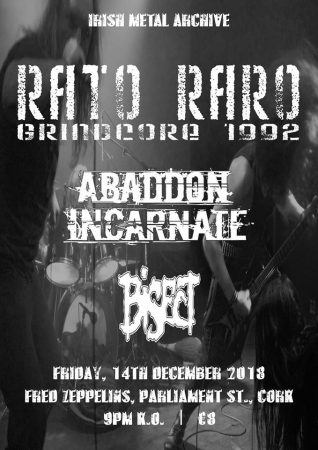 RATO RARO is a band from Palencia founded in 1992 by the brothers Toño and Raúl who have maintained the band during all these years, in 2008 Visy joined them on guitar and they have remained as this trio since.
The lyrics of the band deal with drug abuse, mental self-destruction, alcohol and excesses but they also have their demands against abuses of power, wars and injustices. To date they have released three albums, the most recent ” Moleculeccosedelia ” in 2014.
The style they practice is a kind of fusion between Grindcore and Punk-Crust influenced by bands like Repulsion, The Exploited, Doom, Napalm Death or Terrorizer.

Abaddon Incarnate can be characterized as being heavily influenced by both Grindcore and Death Metal as well as many other kinds of genres such as Sludge, Crust, Punk and Doom.
Originally formed as Death/Thrash band BEREAVED back in 1989, this early incarnation recorded two demos. ‘Signs Of Death’ in a1992 and ‘Tortured Souls’ in 1994. The decision was then made in 1994 to change to a faster and more brutal Death/Grindcore style, so they changed their name to ABADDON INCARNATE and since then the band has released a demo cassette, two promos, five full-length albums, a Split 7″ with US grind band PHOPIA and most recently a live album.
The band has played alongside notable bands such as OBITUARY, NAPALM DEATH and BOLT THROWER also performing at the London Death Fest, Day of Darkness, Dublin Death Fest and the Siege Of Limerick. They have toured extensively in Europe including Spain, France, Britain, Switzerland, Germany. They have also toured as far away as Russia, Australia, and were the first extreme Irish metal band to play in Ecuador, Colombia and Peru.

Bisect is a band that formed during 2013 from the ashes of a Polish band that carried the same name. Based in Cork, the band currently is comprised of an international team of Irish, Polish and Italian musicians. Phil Langero (LOS LANGEROS) on the vocals, Kieran O’Neill on the drums, Maciek Lachmann on the bass and Fabrizio Vitali on guitar and backing vocals.
Bisect sound doesn’t really fit any one label, maybe a result of their Polish/Italian/Irish background, but the resulting musical blend is an aggressive hardcore d-beat sound with brutality and grind fronted by two intense vocalists with crushing lyrics that scream about issues like social justice, inclusion/marginalisation,poverty, etc
Their pummelling albums “We Are The Migrants” (2013) and “Time The Bastards Fell” (2018), as well as the Split 12″ with Cork band HORSE, are availble via bandcamp.

This event took place on Friday, 14th December 2018 at , Cork .
If you have any video links or photos, feel free to share them below.