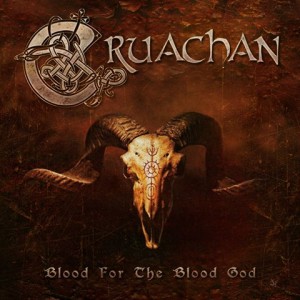 Dublin Pagan Black Metallers CRUACHAN have revealed the artwork painted by John Fay, the band’s own whistle blower, that will adorn the front cover of their upcoming album “Blood For The Blood God”.

The new album will be the second in the bands ‘Trilogy Of Blood’!

The album was recorded by Michael Richards at Trackmix Studios in Blanchardstown, Dublin. And will be the bands first album to be released through their new label Trollzorn Records, which also has fellow Irish Pagan Metal heathens, CELTACHOR, on their books.

Details are yet to be confirmed but “Blood for the Blood God” is also expected to be released on a very limited vinyl run!

We’ll post more details on the album as when they arise!
So stay posted!