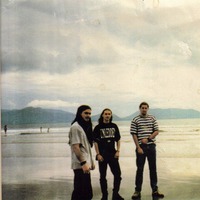 LAST BREATH were a short lived Death/Thrash Metal band from Carlow. Formed around the beginning of 1991 with by Vinnie White (bass) and Cathal FitzGerald (drums) with Barry Whyte (guitar/vocals) round out the trio. This line-up recorded and released their first 6-track ‘Minds Eye’ demo in 1992. Soon after Barry Whyte left the band and went on to form DWELLER, also featured here on the Archive. The two remaining members were then joined by John McRory on guitars, with Vinnie White taking on vocals along with his bass duties. They quickly followed-up their debut demo with a second 8-track demo, ‘Tragic Circumstance’, the same year. Both demos are available to stream and FREE download from the links below…

By the following year the three members decided to change tack and shifted their sound towards a more straight-forward metal/hard rock direction. They changed their name to MIND’S EYE, who are still actively recording and have been carving out their own brand of Rock/Blues/Metal for two decades with numerous EP’s and albums under their belts. All of which are available for FREE download from the bands website… (http://mindseyecarlow.com/fr_home.cfm)

In the very early days the band enlisted long time friend Ed Wallace for live appearances touring the ‘TRUST’ and ‘SEE’ (EPs) through to ’95.The band then took an extensive break as founder member Vinnie moved to England and John to Australia. It wasn’t until late 1997 that the band reconvened as a three piece once again to record their first LP ‘SALVAGE’.

Eventually Vinnie moved again, this time to Australian also. There were no recordings for a seven year gap until the group returned with Dave Ryan joining on rhythm guitar, to record the ‘TIME’ (LP). Closely followed the same year by the album ‘THE ROAD ENDURED’, which saw the band growing into a heavier vein whilst still holding onto their recognisable style.

2005 was another busy year recording-wise with the albums ‘SEE ALL SAY NOTHING’ and the covers collection ‘WHEEL OF DESTINY’ produced. 2006 saw the double release of the epic ‘TWO SIDES TO EVERY STORY…’ and ‘…AND THEN THERES THE TRUTH’ (LPs). It was at this point that the band were once again torn in two as Vinnie and John relocated with their families to Brisbane and Sydney respectively.

This was not to be the end for the Carlow-born outfit as they produced recordings in Sydney, Australia of 2008’s ‘ENDEAVOUR TO PERSEVERE’, ‘2009’s ‘FROM BACK THEN TO NOW’ and the double long play effort, 2010’s ‘EMERALDS TO DUST’ and ‘THE UNYIELDING END’. 2011 sow them releasinge released THREE more albums, ‘The New World Inquisition’, ‘The Rainbow People Shall Inherit The Earth’ and ‘Pirate Songs For The Damned’.  And to round off the spate of releases, the two-part ‘El Diablo De Circo’ EP’s (Part 1 consisting of five cover songs and Part 2 consisting of 7 new original songs). So! Basically a forth new album.

Three online single releases have surfaced during 2012-2013 that preceeded their latest concept album ‘Into the depths of dreams’. Busy! Busy beavers that they are.