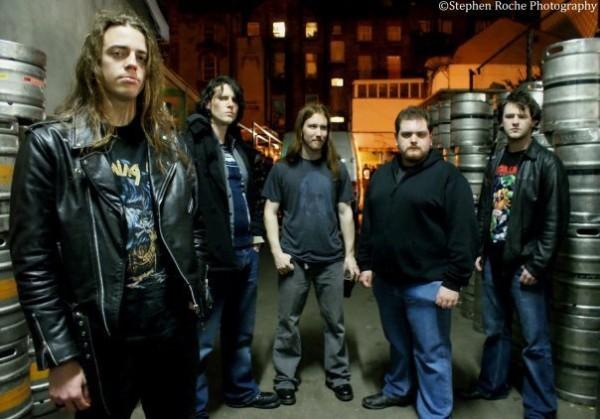 McGALLIGOG were formed in 2006 by Matt O’Brien and Ollie Deegan. How they came up with the band name is anyone’s guess. They released a 6 track EP called ‘Delusions of Madness’ in 2010 which was well received. And was recorded by Alwyn Walker at Komodo Studios. The physical release was limited to 250 copies. But the band have made it available for FREE download through their websites.

As a debut release, the EP is well above average. The vocals are bordering on black metal, but it suits the music. The song writing is very good. The musicianship and delivery is excellent. There’s a wealth of solid riffs that have a great classic 80’s metal style vibe to them. And the solos are spot on too, with a fair nod to Marty Friedman era MEGADETH to them. As well as the production from Alwyn Walker, which is always to an excellent standard. Well worth checking out. Especially since it’s a FREE download.

Easily one of  my favourite bands at the moment, McGALLIGOG have made their soon to be officially released new album ‘Powered By Death’ available to stream from both their Soundcloud and Bandcamp sites. The official release date is the 3rd of December 2011 so be sure to get your hands on a physical copy on or after that date. They will be playing at the ‘Seasons Beatings’ gig on that day, December 3rd, which will also serve as the official launch gig. This will be an all day event with over 10 bands playing and there will be various promotions and specials available from the bar. It’s free also so head in if you can.

‘Powered By Death’ is a very solid sounding album and a fair bit more polished around the edges than last years excellent ‘Delusions Of Madness EP’. Everything has been stepped up a few pegs. The song writing, musicianship, vocals and production! They’ve all been tightened up for this new release. As with the debut, the riffs on offer have plenty of meat to them and the lead guitar work is again excellent, with a fair whack of early ARCH ENEMY and CHILDREN OF BODOM to some of the guitar leads and melodies too. And the vocals are more varied than previously mostly incorporating a blackened death style, but mixing it up with some clean passages and even a few group vocal parts. I still hear Alexi Laiho in a lot of it, but it’s obvious the band are trying to diversify as much as possible without sacrificing their overall style.

Overall! It’s a brilliant album and an obvious progression from the previous EP and it should definitely appeal to fans of European style metal bands. But the only ‘problem’ I have, as such, is that each time I listen to it I find myself wanting to throw on ‘Delusions Of Madness’. I suppose I just need to let the new album sink in a little longer. Check it out on the embedded player below.