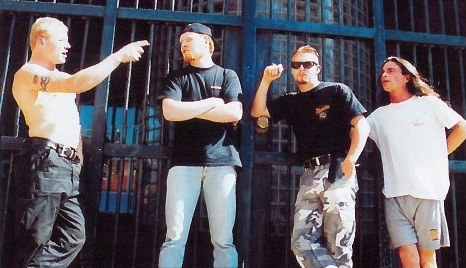 CLAY PIGEON started out back in 1994 with Paul Nash (guitar), Gavin Burns (drums), Keith Walton (vocals) and John Colbert (bass). They used to rehearse in Paul’s brother shed who also happened to keep racing pigeons, which is where the band name originated from. No recordings were made by this version of the band, but they gigged around Dublin and there is apparently some live footage knocking about.

This line-up broke up about a year in. But Paul and Gavin started it up again in 1996, this time with Gareth Redmond on vocals and Des Bracken on bass. They rehearsed in the Underground Rehearsal Studios in Dublin and recorded a ‘self-titled’ demo in January 1997 at Sonic Studios. Tracks included ‘Good N Bad’, which they made a video for, ‘Take It Back’, ‘Fix Me’ and ‘What Do They Know’. About 50 copies were printed up. Soon after Des Bracken left and Darren Clarke joined on bass. This new line-up went on to recorded the ‘Psychostomp EP’. Recorded in Underground Rehearsal Studios and Cosmic Recording Studios in 1998 featuring four new tracks.

As well as gigging around the Dublin area, CLAY PIGEON also did one gig in the UK with Paul Di’Anno’s BATTLE ZONE in 1997. They were featured in an article for the Sunday World and according to Paul they, ‘managed to lie are way on to a TV show on RTE called Echo Island’. Garreth Redmond ended up leaving. But the band were supposed to do a cover of AC/DC’s ‘Beating Around The Bush’ for an Irish tribute CD, so they got Lar Fraser to come in on vocals. The tribute CD never went ahead and CLAY PIGEON did just one gig with Lar before calling it a day.