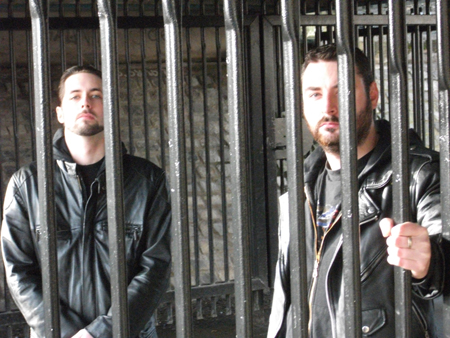 AFTERMATH were a Thrash/Death Metal band from Belfast. They had a couple of decent demos that they released in the mid 2000’s but the line-up dissolved and two of it’s members, Chris Brady and Kevin McVeigh, went on to become the Black/Death metal band ALTUS ASTRUM, essentially an extension of AFTERMATH as tracks from the final AFTERMATH promo ended up on the future ALTUS ASTRUM promo and debut album.

ALTUS ASTRUM are a 3-piece Belfast based Black/Death Metal band formed in 2007 when they evolved from a previous incarnation called AFTERMATH. They’re a fairly elusive lot and details are pretty thin. Live! They have supported the likes of DARK FOREST, DESASTER and ALTER OF PLAGUES. Two promo CD’s were circulated. ‘A Godless Rapture’ 2-track promo. And then 2010 saw them release a 3-track promo CD which was followed later the same year by the bands debut album ‘Antediluvian’ which had a CD run limited to 1000 copies and was released through Chinese label(eh…???) Pest Productions.

“Antediluvian presents as nine tracks of unrelenting chaos interwoven with menacing, ambient undercurrents designed to immerse the listener into the forlorn disposition that the album depicts. Lyrical themes take the form of a prophetic narrative exploring the condition of mankind contorted through the millennia by the venom of its own pious rule.” (taken from – http://www.altusastrum.co.uk)

Probably more Black than Death but not exactly your typical Black Metal style. The album has a bit more to offer than the usual fare. At times it can be a pretty raw sounding album production wise but for the most part benefits from it. It wouldn’t have the same impact if it were too clinical sounding. Although saying that, at times it does seem to be missing that certain something. But that’s just my opinion. Check it out for yourself below on the embedded Myspace player. Physical copies can be bought direct from the band (Email) or from Into The Void.

Work was underway for the follow-up release which was expected in early 2012. No idea what the bands intentions are at this stage but I wouldn’t be surprised to hear from them again in the future.