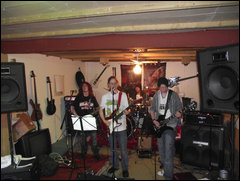 Originally called AFFLICTION! 4 MUTANT HILLBILLIES, or 4MH, were a Northern Irish “HYPER THRASH” band that are inspired by the likes of…

An album “Cranium Abusing Thrash” was said to be complete ready for release back in July 2010, but I have no idea if it ever actually surfaced.

There was one track available online through the old 4MH Myspace page called ‘Anak Durhaka‘, which was originally recorded by 4MH and was available for a time on their old Myspace and Bebo pages. The track eventually found it’s way on the 2013 ACID AGE album “Enter The Zomborg”.